Wild Cats from Chile: Check out our own “Big Cats”

In Chile, there are numerous species of native animals that find here the ideal conditions for their well-being. Wild cats or big cats are not the exception, and, in our country, we find seven of their species that inhabit it.

Until very recently, five types of wild cats were known as natives of Chile: the Puma and four more species belonging to the Leopardus family; the Colocolo Cat (Leopardus colocolo), the Andean Cat (Leopardus jacobita), the Güiña Cat (Leopardus guigna) and Geoffroy’s Cat (Leopardus geoffroyi). “All of them mostly have nighttime habits and, due to man’s action, they are in various categories of threat” clarifies Ladera Sur, a digital platform specialized in nature and environmental issues.

However, our friends from the Chilean Wild Cats Coordinating Committee (Coordinación de Felinos Silvestres de Chile C.F.S), a non-profit organization dedicated to the education and conservation of these animals, explain that there are now seven of them: “At first, they told us that there were eight subspecies of the colocolo cat in all of South America, to later ratify, through a study in 1994, that there were three types of colocolo Leopards: colocolo, pajeros and braccatus, with the colocolo cat only in Chile”, says Francisca Ávila, expert of the NGO.

Today, in the investigation “Taxonomic Review of the Cat of the Pampas”, edited by the “Zoological Journal of the Linnean Society” in March 2020, clarifies that now there are new species to consider: “This study changed the focus and, after a research that included analysis of bones, fur, and others, it is concluded that the new classification of colocolo leopards integrates five more completely different species. Now, we have a clear division of the species that inhabit in Chile: the Leopardus colocolo that lives in central Chile, the Leopardus Garleppi in the northern part of the country and, in the southern zone, the Leopardus Pajeros, plus two more species than appear to be in Brazil and Bolivia”, Francisca Ávila details.

Finally, some of these animals are endangered, and its threats are directly related to the damage of the habitat where many of these wildcats are kept, so its knowledge collaborates directly with the awareness of their situations and protection.

In this article, you can read about these species, learn about their home areas, and the current degrees of threat many of them have. This way, we can all support the appropriate awareness of these beautiful Chilean cats and thank the valuable work of dozens of people who are dedicated to their conservation:

With presence from Arica to Magallanes, it’s 2.8 meters long, 80 cm high, and weighs up to 80 kilos. It has five claws on the front legs and four on the hind legs. It is considered the most dangerous predator in the country and the most significant “big cat” of our land.

Internationally its conservation status is of “least concern.” However, according to the Chilean Environment Ministry, the fragmentation and loss of habitat has affected the availability of food, shelter, and territory, which increases the pressure on local populations of Pumas. Lately, this wild cat has been forced to stay in high and inaccessible places, where the severe reduction of its food sources, due to hunting actions and/or habitat modification or deforestation, are its primary threats.

The Andean Cat is found in northern Chile in the areas of Arica and Parinacota, Tarapacá and Antofagasta, and in other Latin American countries such as Argentina, Peru, and Bolivia. With 80 centimeters long, including a tail of 35 cm and a 4 kilos weight, it’s the most endangered wild cat of America and is currently in “danger of extinction”.

The NGO “Andean Cat Alliance” is a joint effort of various professionals from South America united for the protection and conservation of this animal. This team has managed to identify its main threats: degradation and loss of habitat, hunting, and irresponsible pet ownership.

This organization has not only studied the threats of the Andean cat, but also: “Throughout Multinational Programs we are carrying out interventions to neutralize or lessen the impact of these threats, respecting local cultures and idiosyncrasies, working with communities.”

One of its most notable results was the making of the documentary short “Seeking the Andean Cat”, available on YouTube. In the piece, directed by Rodrigo Villalobos and Andrés Cid, we can see how a team of conservationists incessantly tries to find images of the Andean Cat without manipulating its habitat, while telling its story and the complexity of its current situation.

It´s considered the smallest wild cat in Latin America, with a length up to 73 cm and a weight between 2 to 3 kilos. It can be found in Chile from Coquimbo to Patagonia in Aysén, Cochrane, and lives in the forests and scrub environments with broad coverage. However, trails of the cat were found in fragmented forest areas.

Currently, it´s in a vulnerable situation. From 1970 its presence has decreased by 70%, with less than 10,000 cats, so hunting and capture are prohibited. The C.F.S. has been raising awareness regarding their state of vulnerability, providing information as part of their #YoCuidoAlGatoGüiña campaign.

This medium-sized cat is 60 centimeters long, with a 30 cm tail and an estimated weight between 3 to 5 kilos. According to the Environment Ministry’s classified species file, this cat mostly has night habits and is an excellent climber, sleeping in trees during the day. It feeds on small mammals (rodents and hares) and birds, although there are fish, amphibians, and reptiles in its diet.

In general, it is commonly found in forest zones at the northern portion of Chilean Patagonia, such as the Torres del Paine National Park. Its conservation status is “almost threatened”, since it still doesn’t meet the criteria to be part of any of the threat categories. However, indiscriminate hunting is its main danger.

It’s a small cat, the length of its body is around 70 centimeters, with a tail of an average length of 30 cms, and a weight between 3 to 7 kilos. As previously described, in Chile there are three subspecies with clear distinctions between them, which is why the C.F.S. advises to include them as three different types of colocolo cat: The Leopardus Garleppi that lives in northern Chile; the Leopardus colocolo that is found from Coquimbo to Concepción and the Leopardus Pajeros that lives southern Aysén and Magallanes.

It’s considered “almost threatened” and, although its hunting is prohibited, the Environment Ministry clarifies: “Like other wild cats, the colocolo cat has been heavily exploited for its fur, as well as hunted by poultry farmers. Modification of natural environments is another cause of threat to the species. The presence of dogs within its range has also been noted as a danger for them.” 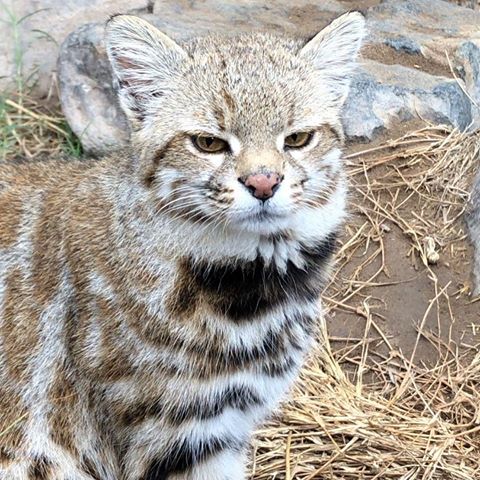