Street Art in Santiago! Discover the colorful side of Chile’s capital

Among the places that the National Geographic designated as Must-Sees in 2018 was Santiago. The capital of Chile was chosen by the magazine because of one the city’s most colorful and unique features:  Street Art in Santiago.

Described as “outside galleries of urban art” by NatGeo, they decorate many streets and corners of Santiago and attract oodles of visitors, particularly for the enormous painted murals and their potent themes. Also for the talented, internationally known artists who have contributed to the project.

Among the creations of Jorit Agoch, Seth, Elliot Tupac, Thierry Noir, Blek Le Rat, Edgar Mueller and Milo, there are also national talents including Inti, Dasic Fernández, Javier Barriga and collective works such as Los Oberoles, that have put life and color in some of the most transited streets of the capital and offer, free of charge, a beautiful sight worth seeing.

The artists and collective muralists came together in the great Barrio Franklin, a neighborhood in the southern part of the Chilean capital, and one of the newest Street Art sectors in Santiago.

The famous flea market, called the ¨Mercado Persa Biobio¨ is found in this historically commercial neighborhood, where there are also some of the most attractive examples of street art.  One should also see the “Mercado Persa Víctor Manuel” where the documentary “Chile Style” was filmed.

This place, also known as “the antiques warehouse” is becoming the cultural center of the neighborhood, where concerts, outdoor fairs and events are held in the central plaza.

Here one can find large-scale works by internationally recognized artists, including Inti and Alejandro “Mono” González.  There’s a 50-meter (164 feet) mural here that adds dazzling color to Placer Street in the Persa Market.

Among the many that can -and should- be mentioned, is the mural inspired by the Island of Chiloé, done by Daniel Marceli on San Isidro Street; as well as the creation by Basco Vasko on the interior ceiling of the Persa Víctor Manuel market.

Cekis, the Chilean muralist living in New York, is also notable and has left his mark in cities like Hamburg and Sao Paulo.  In 2018, he travelled to Santiago specifically to paint the exterior roof of the Persa Víctor Manuel with his creation called “Borde Sur”. 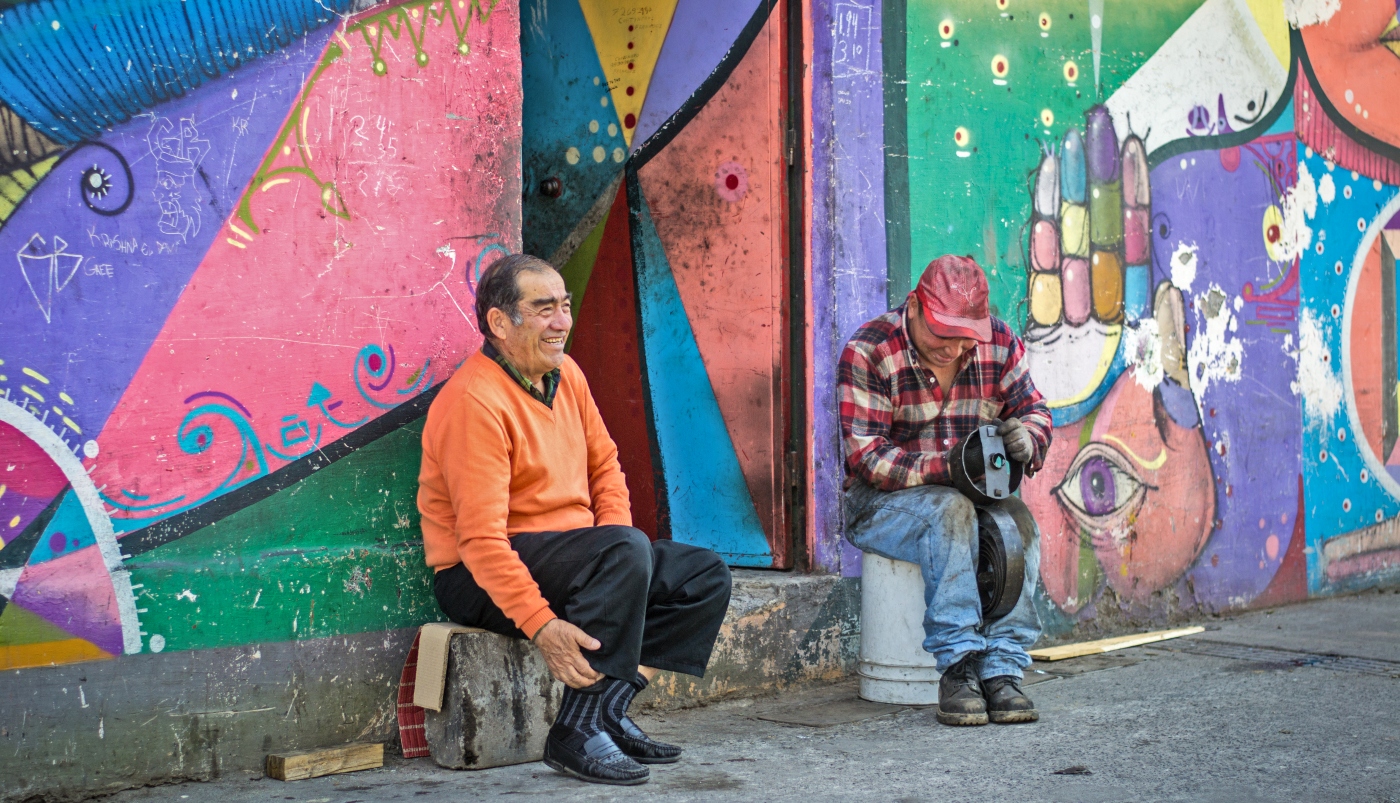 Going west from downtown Santiago, one finds Barrio Brasil and Barrio Yungay, two neighborhoods that offer cultural spaces, numerous restaurants and cafés, as well as a variety of Street Art.

Walk along these streets and you’ll find a mix of colonial houses and modern buildings.  Have your camera ready, as you’ll be surprised by the hundreds of different sized murals to be found along the way.

These neighborhoods were built mostly during the XIX Century for the first wave of Santiago’s elite class. Later in the 40’s, many of the aristocrats moved uptown to the east, leaving these historic buildings either abandoned or transformed into shops or businesses.

In contrast to other historic neighborhoods in Santiago, many of the structures in Barrio Brasil and Yungay have remained intact, and later protected by Chile’s Department of National Monuments.  Currently, some of these are painted with the most interesting and compelling murals in the capital.

One of the most famous is “Integración”, created in duo by Alejandro “Mono” González and French artist Julien Malland. The subject is a young women painted in black and white with an intense expression, who is herself painting a colorful line on the wall.

Another well-known mural is the  “Centro Ferretero”, located on Erasmo Escala Street.  The subject of this work is grotesque figures of workers with animal faces. 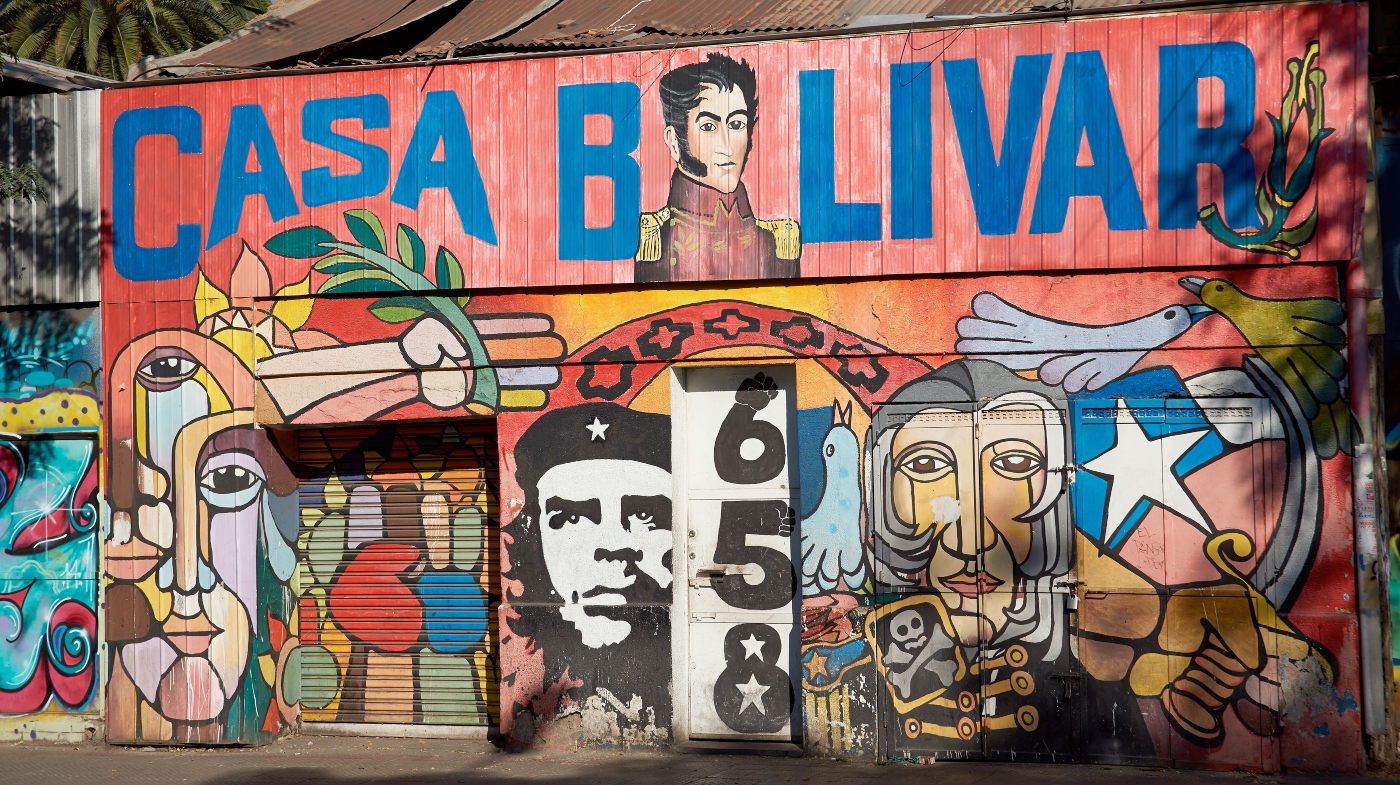 This street is home to important historic buildings such as the Stock Exchange, the old National Congress and the Pre-Colombian Art Museum, all just steps away from the Presidential Palace called La Moneda and the main Plaza de Armas.  The area was converted into a pedestrian walk in 2017, and provides an oasis of color in the middle of the city.

Dasic Fernández was the artist in charge, and worked with a team of architects and designers as well. The final creation consists of 3,300 square meters (almost 4,000 square yards) painted on the ground in an area of 400 lineal meters (437 yards), bringing together three distinct spaces. The first, the social connection space, between Moneda and Agustinas Streets, equipped with park benches, tables and planters.

Next is the sustainable space, with rental bikes, gardens and an arty sustainable structure that lights up with photovoltaic energy at night. Lastly, between Huérfanos and Compañía Streets is the patrimonial space, that features expositions. The Pre-Colombian Art Museum is also located here.

Cross the Pío Nono Bridge beside Plaza Baquedano to enter Santiago’s Bellavista neighborhood.   Here music, theater and Street Art are alive everywhere.  There’s an interminable number of murals to be found here, some painted by professional artist and others by beginners.

Bellas Artes, part of the Bellavista neighborhood, is home to dozens of bars, restaurants, theaters and emblematic works of Santiago Street Art.  Where to start? Simply walk the streets of Loreto, Dardignac and Antonia López de Bello.

Why such emphasis on Street Art? Many business owners in this neighborhood enthusiastically receive artists since their work calls the attention of tourists and passer byers that admire what they see and may decide to visit the shops.

Both graffiti and murals have since long ago won acceptance here.  In fact, this kind of art has become symbolic of the area.

A mural done by Catalina Rojas in 2006 at the request of the Pablo Neruda Foundation serves as an example.  It consists of colors and symbolic elements that are consistent with the Nobel Prize Winner’s vision, located in front of Neruda’s home-turned-museum known as “La Chascona” on Chucre Manzur Street.

One of the most remarkable points in this neighborhood is the gallery created by the Chilean muralist known as Pigüan.  Some of his most famous works can be found on the streets of Bellavista depicting eccentric characters of the collective imagination with colorful pictures that are representative of the artist. We challenge you to find some examples!

Lastarria Street begins beside the Centro Cultural Gabriela Mistral (GAM), and gives its name to the street between Alameda on the south and Parque Forestal on the north, Irene Morales Street on the east and the Cerro Santa Lucía on the west.

This small and charming neighborhood close to the Mapocho River is full of architecturally interesting houses and buildings.  It was declared a Typical Zone thanks to its historic monuments: the Palacio de Bellas Artes, the Posada del Corregidor, Palacio Bruna and Vera Cruz Church, among others, giving the area great value.

And, of course, its many examples of Street Art!  Some of the most interesting are in the Plaza Oriente of GAM, where one of the best-known murals from the Brigada Ramona Parra collective can be found.  The collective is famous for painting leftist political propaganda using only paint and no aerosols.  Their main inspiration is the great Mexican muralists.

A double mural of their work can be found as you exit the Bellas Artes metro station (Línea 5), whose author, Inti, is one of the main Chilean muralists, of international fame. The subject of the mural is two giant dolls with clear Andean influence painted in Earth tones.

The Street Art in this neighborhood is unique in that many of its works are not done in paint or aerosol.  Some of the artists have chosen adhesives as distinguishing elements and have left their mark as artists, as well as given clues to the evolution of the urban genre in Chile.

A bit further in downtown Santiago, in an area called San Miguel, 40 enormous murals have been painted thanks to an initiative that began in 2010, and won the enthusiastic approval of its residents.  This sector, which lies to the south of the capital, has apartment buildings that are full of colorful art that provide a happy sight.

The main themes are the Independence Bicentennial Celebration, a homage to the Mapuche and Chilote tribes, Latin America, Human Rights, free fairs and Chilean literature.

On Avenida Departamental, pasaje 4, there is a representative mural called “Meli Wuayra”, meaning  “Four Winds” in the Aymara language.  It was created by the Aislap duo and features the great Machi, healer of the Mapuche tribe, dressed in the typical regalia and the four magic directions leading to the cosmos as understood by this people.  Really, a Must-See! 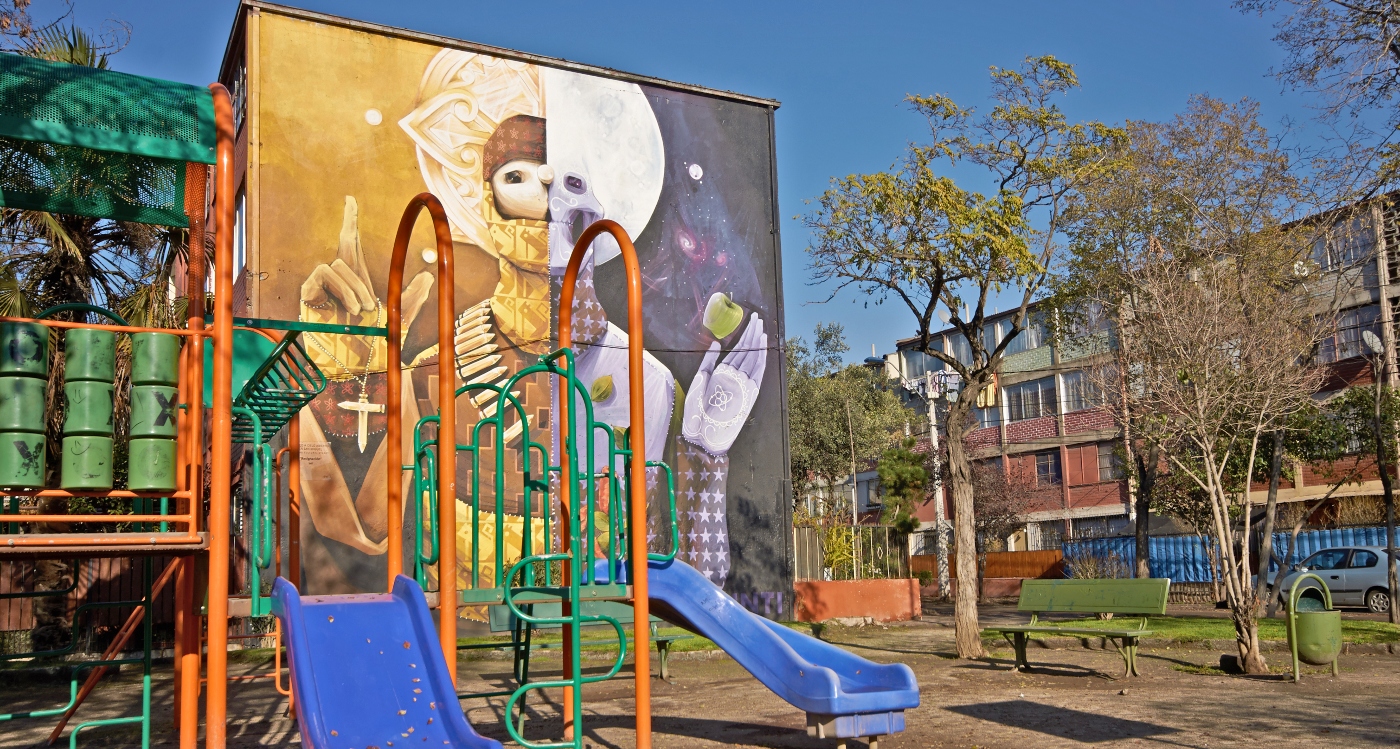 Ready to see some murals? We invite you to come to Santiago and discover these colorful urban works of art.  Remember that some are sporadic, or may come out of nowhere, when you least expect to see one, so we recommend that you bring your camera in order to immortalize the ones you encounter.