SCENIC ROUTE. THE LAKES AND VOLCANOES OF CHILE

WHEN THE DESTINATION IS THE ROAD

Have you ever heard of the Interlagos network in the south of Chile? It’s also known as the Lakes and Volcanoes Scenic Route and it crosses areas booming with resources in terms of its landscapes, environmental and cultural value. Without a doubt, it is an important touristic point in the region of La Araucanía and you shouldn’t miss the opportunity to see it because it’s as beautiful as other marvels in Chile such as the Atacama Desert, Rapa Nui or Torres del Paine.

Over 2 thousand kilometers (1242 mi) of road, mostly paved, connect six different tourist circuits that run through three regions and where you can see 26 large rivers, 22 lakes, 17 active volcanoes and 12 national parks. In addition, you can visit seven winter resorts and more than half of the hot springs in Chile. This and so much more awaits you. Come and explore the road!

We recommend starting your tour in the city of Curacautín, 83 kilometers (51.5mi) northeast of the city of Temuco, in the Araucanía Region. If you are on Route 5 coming from the north, you should take the exit to Victoria and then travel 57 kilometers (35 mi) along the International Route CH-181. And if you are coming from the south, you must exit at Lautaro and then continue 74 km along Route S-11-R.

The Scenic Route starts in Curacautín, where you can observe two large mountain ranges, the areas of the Lonquimay and the Llaima volcanoes, which correspond to two enormous hydrographic basins: the Cautín and Biobío rivers. The most characteristic natural icon in this tour is the Araucaria Araucana, a tree considered sacred by the Mapuche culture, especially by the Pehuenche people.

In the midst of a spectacular landscape dominated by forests, rivers and mountains, you have many options to visit: the Malalcahuello-Nalcas National Reserve, the Tolhuaca and Conguillío National Parks, the latter declared by UNESCO to be the first Geopark in Chile, thanks to the large number of sites of geological interest that reveal part of the natural environment where dinosaurs lived.

Conguillío was chosen by the BBC to film the documentary “Walking among Dinosaurs”, since it is one of the last refuges in the world that still preserve a landscape like the one where the dinosaurs lived.

As you can imagine, the area’s rich geothermal activity means that in this circuit you will find several hot springs, including the Malleco, Manzanar, Cañón del Blanco and Malalcahuello. Termas Malleco, formerly known as Termas Tolhuaca, is a Thermal Center in the mountains located in the area of the Tolhuaca National Park, where you can visit an ancient geyser and enjoy its sulfur-rich thermal waters.

In the middle of the Andean forest you will find several lodging services, bike paths, swimming pools, restaurants and spas, as well as many outdoor activities, both in the winter and the summer. Perfect for couples that enjoy romantic adventures, isn’t it? 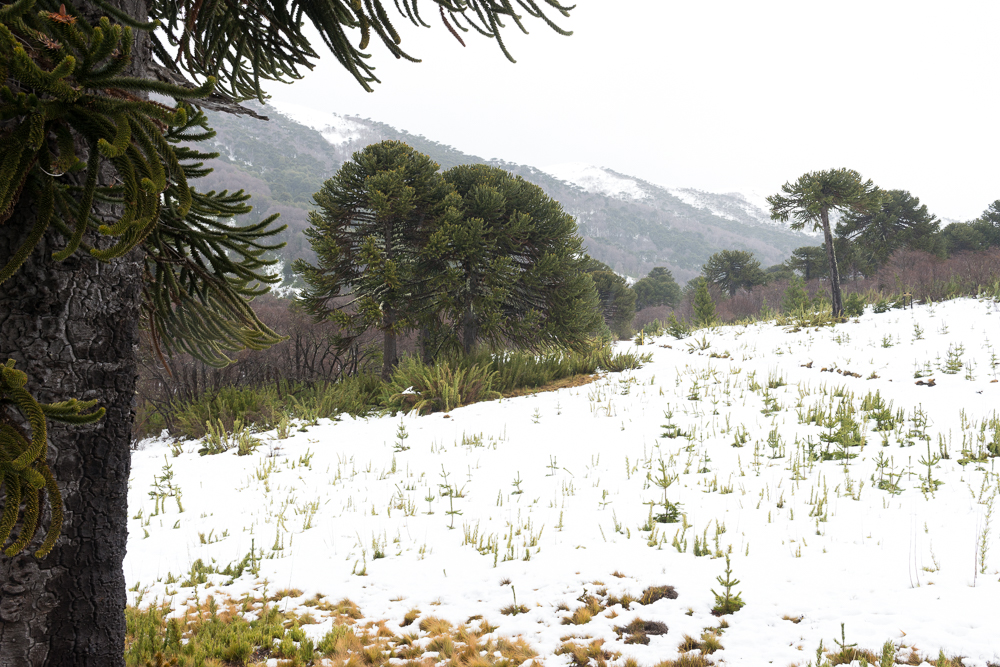 We suggest starting this tour from the city of Villarrica, 80 km (50 miles) southeast of Temuco. To get to Villarrica from the north, take Ruta 5 Sur to the town of Freire, then continue on the International Route CH-199 for 81 km. As you continue south, you will reach Pucón, which is only 24 km from Villarrica, by taking Route CH-199.

The Lakes and Volcanoes Scenic Route is embellished by the majestic figure of the Villarrica volcano, or Rukapillán in the Mapuche language, which is undoubtedly the great natural monument of this circuit. Around it, stand the cities of Villarrica and Pucón, the latter known as “the adventure tourism capital of Chile”.

The Araucanía Lake circuit is a must on our Lakes and Volcanoes Scenic Route, especially since the list of activities you can do on this tour is endless. You can walk or ride along trails immersed in ancient forests, climb the Villarrica Volcano, go rafting on the Trancura River, fishing on the Toltén River, relax in natural hot springs and be in direct contact with the roots of the Mapuche culture, one of Chile’s aboriginal peoples. And don´t miss the Huerquehue or the Villarica National Park or Lake Caburga either! 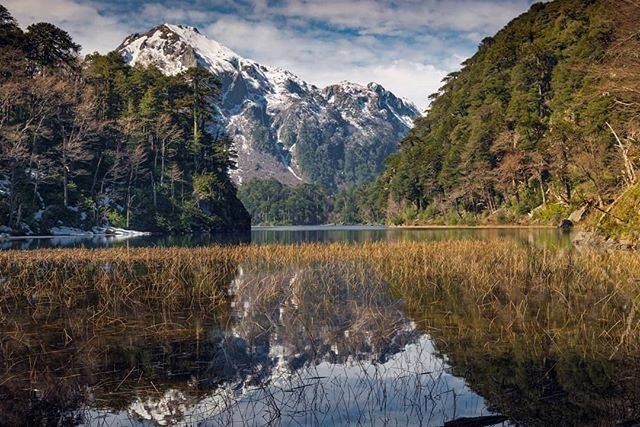 Lush evergreens are omnipresent in the Valdivian rainforest, the only temperate rainforest in South America. It will accompany you throughout the circuit, as you visit all seven stunning lakes: Calafquén, Panguipulli, Riñihue, Pullinque, Pellaifa, Neltume and Pirehueico.

With a strong Mapuche cultural identity, a historical past linked to the old timber ports and a wide variety of hot spring centers, this circuit includes natural attractions such as the Biological Reserve Huilo-Huilo and its almost virgin ecosystem. In fact, there are many areas of great scientific and conservational interest from all over the world, because of its particular geography: lakes of glacial origin, eternal snow on the Mocho-Choshuenco volcano and countless waterways. 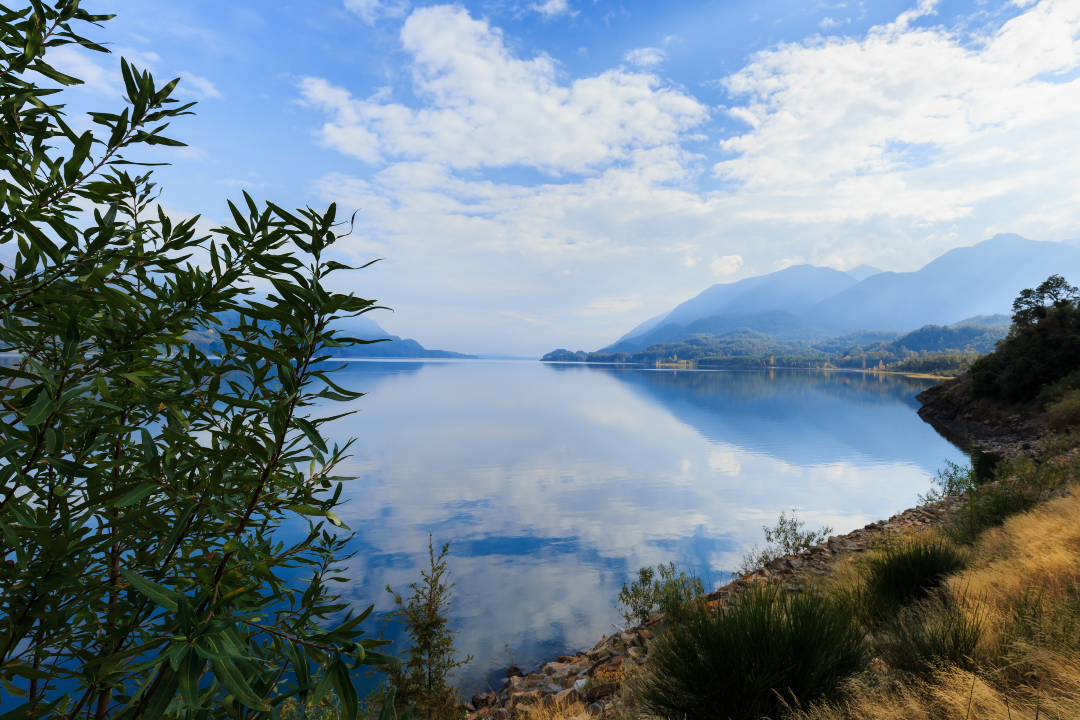 RANCO LAKE CIRCUIT, A GRAND LAKE AND ITS ISLANDS

Continue your trip in the city of Futrono, 55 km (34 mi) southeast of Los Lagos, taking Route T-55 off of Ruta 5 Sur. You can also get to Futrono from Reumén, a town south of Los Lagos, along Route T-625.

This adventure can begin by circling Lake Ranco, the third largest lake in Chile, with an area of 442 square kilometers. During the journey you will discover some of the most exclusive and beautiful lake resorts in the country, extensive cattle ranches, exuberant Valdivian rainforest, impressive mountain cliffs and viewpoints to see islands, waterfalls and snow-capped mountains.

The road, completely paved, crosses villages and corners full of history, which narrate back to times of the railway, and the steps of the famous poet Pablo Neruda in the area.

The views of Lake Ranco and Maihue, and the arts and crafts of Futrono, are a few of the many attractions here that will not fail to surprise and enchant you. If you are near the shores of Lake Ranco, you might as well cross over to Huapi Island, one of the 13 islands in the lake, and one of only inhabited by a Huilliche community, where you can enjoy an unforgettable ethno -tourism experience. 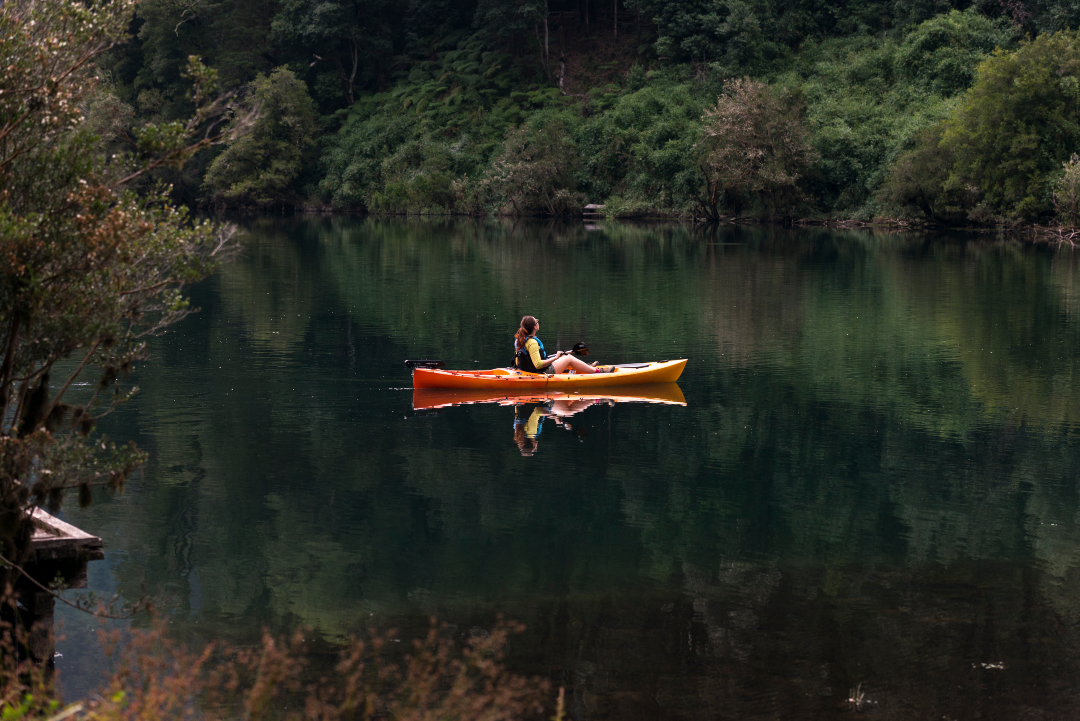 NORPATAGONIA: ALL THE INTENSE GREEN SHADES OF SOUTHERN CHILE

To travel this circuit it is convenient to use the small city of Entre Lagos as a base. It is located 48 km east of the city of Osorno, along the International Route CH-215. From there, two main “arms” are detached, which border either Lake Puyehue or Lake Rupanco.

If you are coming south on the Scenic Route, you can reach Entre Lagos from Lake Ranco, along Route T-941, which passes through the town of Crucero and the bridge over the Chirre River.

This is the shortest and narrowest circuit of the Lakes and Volcanoes Scenic Route, but not the least attractive. The Puyehue National Park and the lake of the same name are two must-sees. Around here, there are some of the area’s main tourist attractions, which include hot springs, ski centers, exuberant evergreen forests, active volcanoes -such as the Puyehue- Cordón del Caulle- with remarkable hiking trails.

Another of the highlights on this route is the spectacular Cardinal Samore border crossing that connects to the city of Bariloche in Argentina.

Like in the entire south of Chile, this area also possesses considerable volcanic activity, with very recent eruptions that have left large rivers of slag. That is why there are several thermal centers here, ranging from the exclusive Termas de Puyehue Hotel to the more popular Termas de Aguas Calientes, in the same sector. There are also natural hot springs on the shores of Lake Rupanco, on its southeastern shore, which spring up simply by digging a hole in the sand. 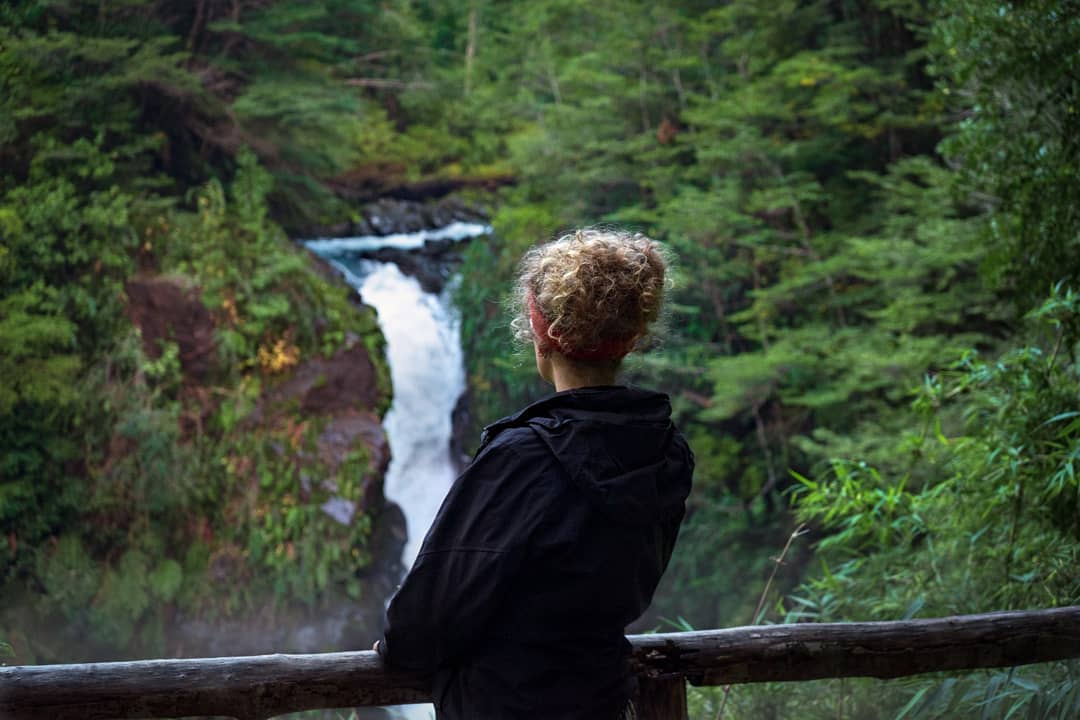 LLANQUIHUE LAKE, IN THE TRACES OF THE SETTLERS

Without a doubt, the base city to start this part of the scenic route is the city of Puerto Varas, the tourist capital of southern Chile, located only 22 km (13 mi) from Puerto Montt and the airport. With first-class tourist services, you can organize all the tours of the Llanquihue basin from here.

If you are coming from the north, the most direct way is on Ruta 5 Sur. If you are following the Scenic Route, you can also arrive from the city of Entre Lagos, taking Route 215 westward for 47 km (29 mi) until you reach Route 5, where you must continue southward for 86 km (53 mi).

Puerto Varas and the cities in this area have a marked German influence, seen in its architectural style. The city of Frutillar, which houses the German Colonial Museum, continues to win praise for its powerful cultural offerings and was recently recognized as the Creative City of Music by UNESCO.

For many, this circuit is simply the highlight of the Lakes and Volcanoes Scenic Route. Completely bordered by the second largest lake in Chile, this route passes under the shadow of the magnificent Osorno, Calbuco, Puntiagudo and Tronador volcanoes, some of the most beautiful landscapes in the south.

Among its great attractions are the Vicente Pérez Rosales National Park, the crystal-clear Petrohué River, Lake Todos Los Santos and the bicycle path that borders Lake Llanquihue which is the largest in the country. In addition to hiking, an experience you can’t miss in this privileged environment, is fly fishing. 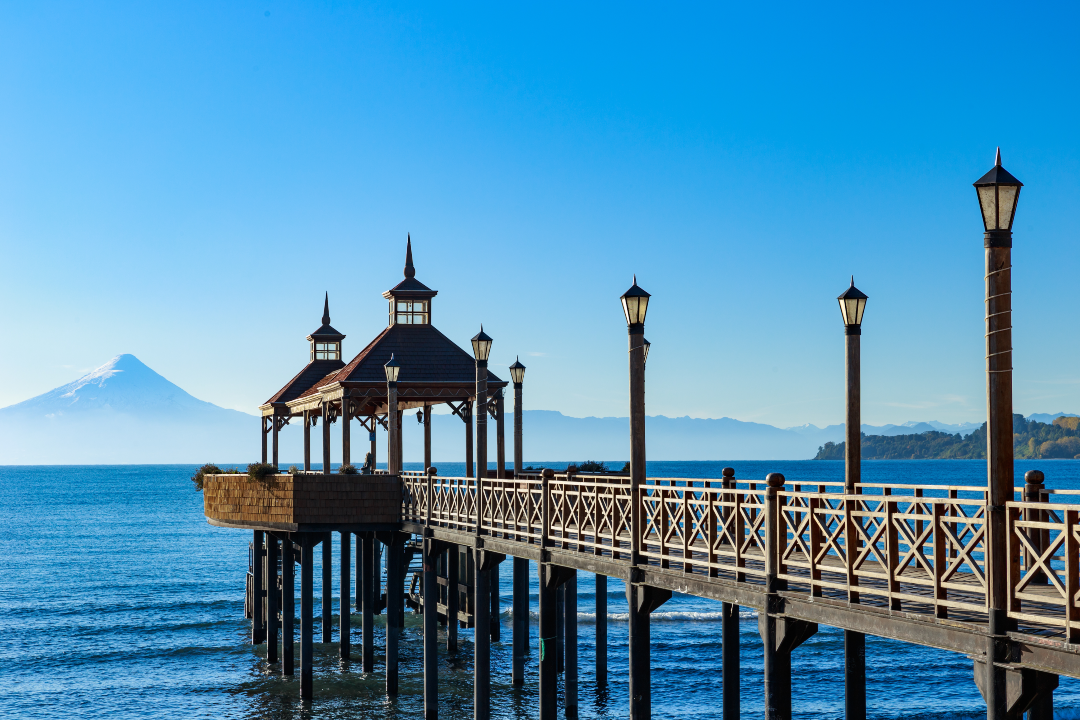 Find the maps of all the circuits in the following link:

This video will give you an idea of what to expect… don’t miss ithttps://www.youtube.com/watch?v=82_kfn6nYTc