The views of Valparaíso are one of a kind and part of the explanation of why this city is one of the most popular in Chile. With plenty of visits undoubtedly attracted by the spectacle of its colorful hills, populated by thousands of streets and houses,  all of them can be explored through the beautiful elevators of Valparaíso.

In the 19th century, before the Panama Canal, trade transformed Valparaíso into a great center of commerce. The city became small and the people built their houses upwards the hills that surrounded the city. These heights had to be climbed, so the creation of new accesses became key.

The classic elevators of Valparaíso were a quick solution to this situation and a massive way of moving between the different steep hills. Valparaíso’s elevators are part of the urban transport system used daily by its inhabitants and constitute a traditional construction that represents a cultural and industrial heritage, part of a city that was chosen a World Heritage Site by UNESCO in 2003. 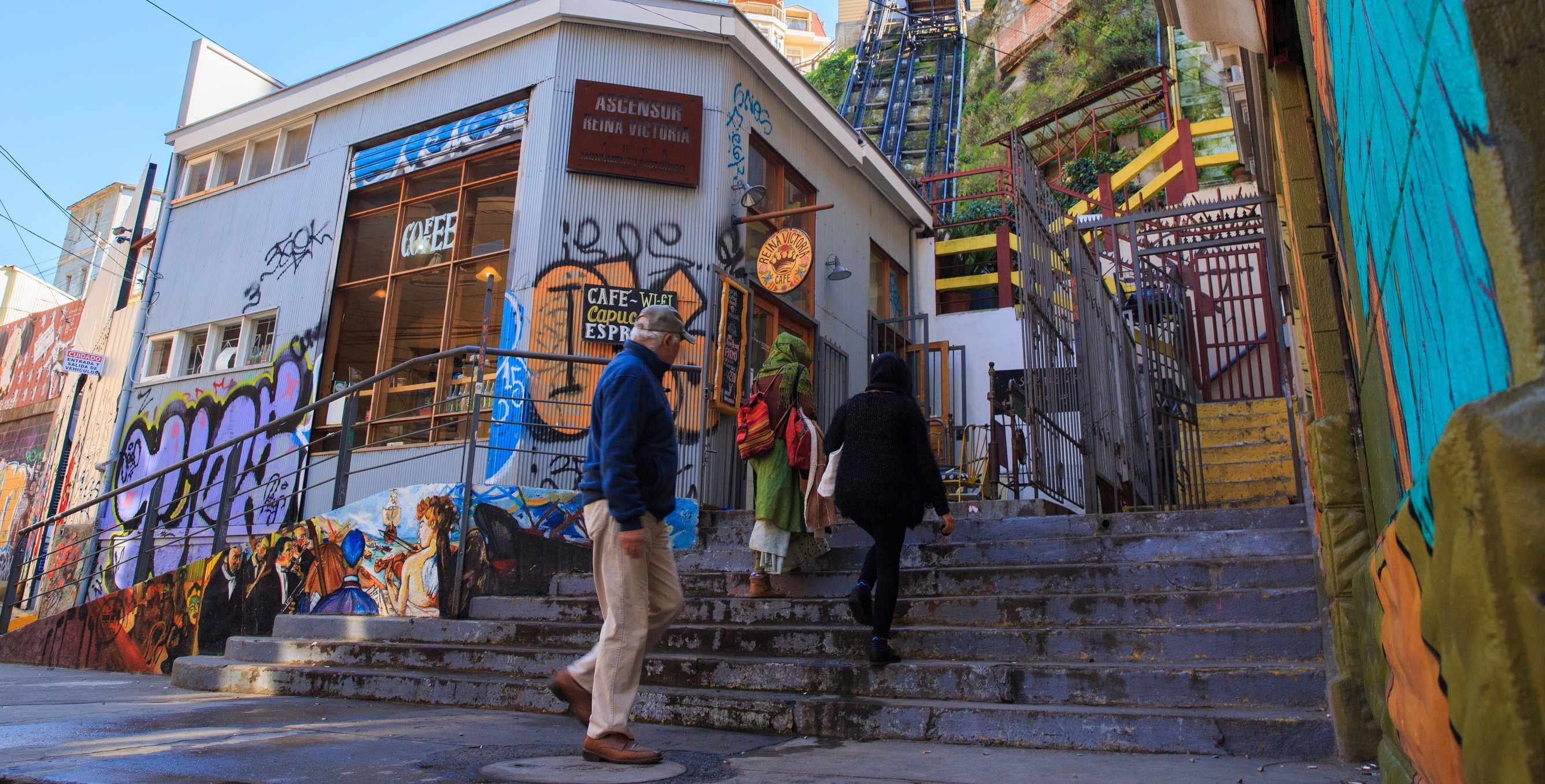 Those who have used this picturesque means of transport, guard in their memory the magical experience of rising above beautiful views of the bay of Valparaíso, accompanied by the wobble and creak of well-preserved machines that take you to the upper station.

In the year 1880 elevators began to be built, as part of the rapid development of the important port city of Valparaíso. On those days, the city managed to have 31 elevators, all of which made the life easier for all the “porteños”.

With robust machines imported from Europe, most of which can be seen and appreciated in vintage machine rooms open to visitors, today there are 16 of these technical wonders in operation.

These elevators are Chilean heritage treasures and in this small selection that we present to you, there are some of the most distinguished of this classic “porteña” way of transportation.

In 1901, this emblematic elevator that connects Plaza de Justicia (across the street of Plaza Sotomayor), with the “Paseo Yugoslavo”, located in “Cerro Alegre”, was inaugurated.

Initially in private hands, this elevator with an almost exact 45-degree slope, was the first in the city to have a steam engine, and it was widely used by foreign settlers who lived in the Cerros Concepcion and Alegre.

British and Germans settled in large numbers during the second half of the 19th century, with more than 20,000 citizens at the port. This powerful influence is reflected to this day in the architecture of houses and buildings, as well as in the name of streets and squares of the hills.

El Peral elevator takes you to the “Yugoslavo” Promenade, where the “Baburizza Palace” is located, home to the Valparaíso Museum of Fine Arts.

From there you can walk the beautiful and colorful Street Art route, that takes you to its neighboring elevator, the “Reina Victoria”.

Located at “Cerro Alegre”, the “Reina Victoria” (Queen Victoria) elevator was built in 1902 and opened to the public in 1903. It was named in honor of the British queen who died a year earlier, in 1901.

Its base station, on the map of Valparaíso, is close to the Aníbal Pinto square, an emblematic point of the city, close to various pieces of Street Art.

The elevator, with a 52 degrees slope, has the shortest route among all Valparaíso´s elevators, but one of the most interesting, because its rails are supported on the hill itself and planted firmly through large wood pillars. At first, the elevator worked with a system of water scales, which would later be replaced by an electric engine.

The upper station is located on an extraordinary platform/square, which leads to a wooden bridge to an area surrounded by the work of renowned street artists. Finally leading to the “Dimalow” viewpoint promenade, with elegant boutique hotels.

From the exit of the upper station of the “Reina Victoria” elevator, you can see the neighboring “Cerro Concepción” and the Lutheran church of “La Santa Cruz”. The Dimalow promenade ends at Almirante Montt street, which leads to the Anglican church of San Pablo, where the Cerro Concepción starts.

The Cordillera is the second oldest elevator that was built in Valparaíso, at the end of the 19th century. This 60-meter long elevator is accompanied in parallel by a colorful staircase by which the bravest and most athletic rise and fall.

Inaugurated in 1886, the Cordillera elevator was built to respond to the intense commercial activity in the port, during the late 19th and early 20th centuries. The current elevator, built 8 years later in 1894, is a replica of the original, which was destroyed by a fire.

The Artillery elevator is the third oldest of Valparaíso. At first it was a very basic piece pf machine, with a notorious unevenness on its way to the upper station. It was inaugurated on December 29, 1892, but it started to function a year later, due to the lack of water to operate the machinery.

Given the high demand for the Playa Ancha area, so isolated from the city, that the people carried out a project to improve the original elevator, so the “Artilleria” ended up becoming the only elevator system in the city ​​with two pairs of rails and two independent machine rooms.

It´s the most panoramic elevator in the city, with the entrance to its lower station right in front of the Wheelwright Square, next to the Customs Building. Its upper station is located on the “Paseo 21 de mayo”, with its kiosk on stilts and its artisans and street artists in front of the former Naval School, currently converted into the Naval Museum. Its total length is 175 meters, with a 27, 5 degrees slope, and a depth of 80 meters. At one point it had a capacity of up to 50 passengers, but currently can only hold 12 people.

El Polanco is the only elevator of the city that moves vertically, while the rest work as a funicular type.

Among its most striking features are its accesses, presented in the same vertical condition as its operation: its low entrance is through a 150-meter tunnel. Its main entrance has a connection with the hill with a 48-meter-long bridge.

Its only cabin climbs vertically for 60 meters at Cerro Polanco and then goes through the center of a tower, all the way to the end of the ride where a panoramic terrace appears that offers one of the most extraordinary views of the bay of Valparaíso.