COP25 The Conference of the Parties in Chile: The most important environmental meeting in the world

If you’re planning on visiting the Chilean capital this year between December 2nd and the 13th, you’ll witness the entire city submerged in an event of worldwide proportions. Yes, that’s right, because the high representatives of 197 countries will be participating in COP25, the Conference of the Parties, that this year takes place in Chile, chosen host and organizer of the  event.

The main objective of the United Nation’s Conference of the Parties (COP) is to promote policies which aim to protect and care for the planet. It also strives to set new compliance criteria to the Paris Agreement and to improve the emission reduction efforts of participating countries.

And what’s more, the Government of Chile has proposed to include, among the topics of discussion for this global date, the protection of the oceans and the Antarctica, defending ecosystems, forests and biodiversity, the importance of electric mobility and of renewable energies, as well as the importance of encouraging circular economy.

For Chile, this Conference is the biggest and most massive international event ever organized in the country, since the 1982 World Cup. So, as you can imagine, during the days of the event, the press from many parts of the world will have its eyes on our capital.

The country’s commitment to the protection of the ozone layer

Climate change and the damage to the ozone layer are global problems that require everyone’s efforts in order to protect the planet. Chile meets 7 of the 9 conditions of the climate change vulnerability index, making it a delicate situation for Chile when it comes to talking about protecting nature and its resources.

Faced with the extremely delicate ecological setting that our country and the entire world is experiencing, one of the commitments Chile has assumed is the protection of the ozone layer.

It is wonderful to hear news that the hole in the Earth’s ozone layer has gotten significantly smaller, especially since 1987 when the Montreal Protocol was signed and measures were taken to protect it. However, it must continue to be protected and cared for, because it is still recovering and at risk.

Protect the ozone layer by taking these precautionary measures:

* Avoid purchasing or consuming sprays and aerosols with substances that include chlorofluorocarbons (CFCs).

* Avoid using extinguishers that contain halons, a substance that is very aggressive to the ozone layer.

* Check that the insulating material that you buy does not contain (CFC); instead you can use agglomerated cork, which achieves the same purpose but does not pollute the environment.

* Perform proper maintenance of your air conditioners, since its malfunction causes leakage of CFCs into the atmosphere.

* Call a technician if you notice that a freezer does not work properly, as it may leak. The same goes for air conditioning in cars.

* Buy low-consumption household appliances and light bulbs, because in addition to polluting less, you will save on your electric bill.

Ways to be an eco-friendlier traveler

For any traveler it is greatly satisfying to come across clean and unpolluted cities and landscapes, isn’t it? As a traveler, we have the responsibility to contribute to making this happen by acting with respect and awareness in support of the environment and the people who live in the different places we go.

Tourists who have been to Chile to explore its amazing destinations are likely to have experimented the sensation of feeling far-away from home, in one of the world’s most remote territories, allowing one to clear our minds of worries and escape our daily routines, to encounter new places and experiences. But, have you ever stopped to consider the impact that tourism causes in those places we visit?

If you like to travel and you love nature, to explore, to take beautiful pictures, to see different horizons, the steps you can take to be a good tourist with a smaller footprint are fairly simple. Here’s how.

-Being respectful of the places you visit, which includes both the environment and the populations who live in those places.

-Minimizing your waste, trash, and never leaving your litter behind.

-Actively reducing as many negative impacts on the environment as possible.

-Treating locals nicely and with respect, perhaps learning words like Please and Thank you in the local language.

-Being aware of signs, precautions and following rules at monuments and sites.

-Getting around in a sustainable way, walking a bit, taking a bike or using public transportation.

-Helping to build a climate of respect and awareness, both environmental and cultural.

7 Parks to Visit While in Santiago

If you’re planning to visit Santiago during the dates of the Climate Summit and you’re a nature-lover, this big city has a fair share of parks that we suggest you visit while being a #ResponsibleTourist, one who leaves no traces behind and who respects the environment.

Parque Metropolitano de Santiago, or Santiago Metropolitan Park in English, but best known as “Cerro San Cristóbal”, is one of the world’s 5 biggest urban parks, as it extends across four different city districts, it has 1.785 hectares, where there are swimming pools, a zoo, a botanical garden, a Japanese garden, and on the top is the Sanctuary of The Immaculate Conception. It’s a park on a hill that crosses big part of the city and where the panoramic views do too.

This park also has a funicular and a cable car which are fun attractions for tourists who enjoy seeing the city from above.  This park has also gained popularity among bicycle fans and it is common to find cyclists riding to the sanctuary and reaching the top of the hill. 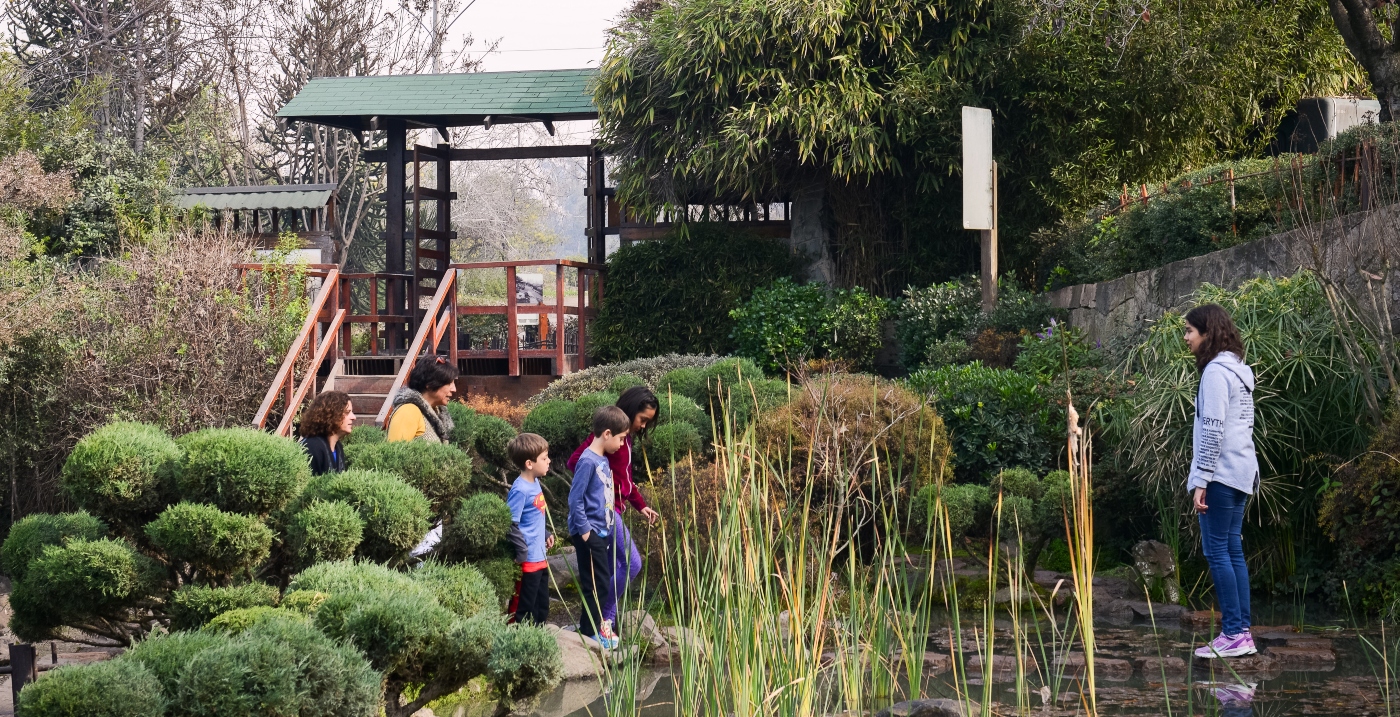 Parque Bicentenario, or Bicentennial Park, is another attractive green area located in the district of Vitacura. It extends over more than 300,000 square meters (358 sq. yards). Within the park there is an amphitheater with enough capacity for ten thousand people, a dog park, two artificial lagoons with flamingos and a garden for the blind, specially designed to allow the participation of these visitors in social and cultural activities.

Parque O’Higgins is one of the largest and most visited parks in the Metropolitan region, not only because of the extension of its green areas, but also because of its cultural value. Since before the twentieth century it has been one of the most popular places to celebrate the national holidays (in September), where people go to parties called “Fondas” and typical Chilean food and drinks are sold in many food stands called “Ramadas”. It is also the official location where the military parade takes place on Independence Day.

The park also has a multipurpose theater, called Movistar Arena, where concerts and high-level events are normally held. Inside the park you can also find artificial lagoons, playgrounds, picnic areas, and a skating rink.

André Jarlan Park, located in the Pedro Aguirre Cerda district, covers about 10 hectares. It was built on a landfill of organic materials and thanks to a municipal project it was transformed into a park that currently receives thousands of visitors, mostly families.

Within the park’s infrastructure you can find several picnic areas and playgrounds, and a small skating rink. Among the trees found in this park, there are 12 different types of native Chilean trees.

Parque de la Familia, or Family Park, is the only urban riverside park in the country, known colloquially as the “sailable Mapocho” because the river allows activities such as kayaking, boating and small sailboats to sail. There are three tire locks that accumulate water from the Mapocho River, which is filtered and released and becomes suitable for sailing. Within the park you can also find an outdoor amphitheater, two soccer fields, playgrounds and picnic areas.

Another important park to visit if you go the capital is the Padre Hurtado Park, formerly known as the “Intercommunal Park of La Reina”. It is one of the largest parks in the city with 98 hectares. Equipped with barbecue and sitting areas, it is suitable for a picnic in the park. 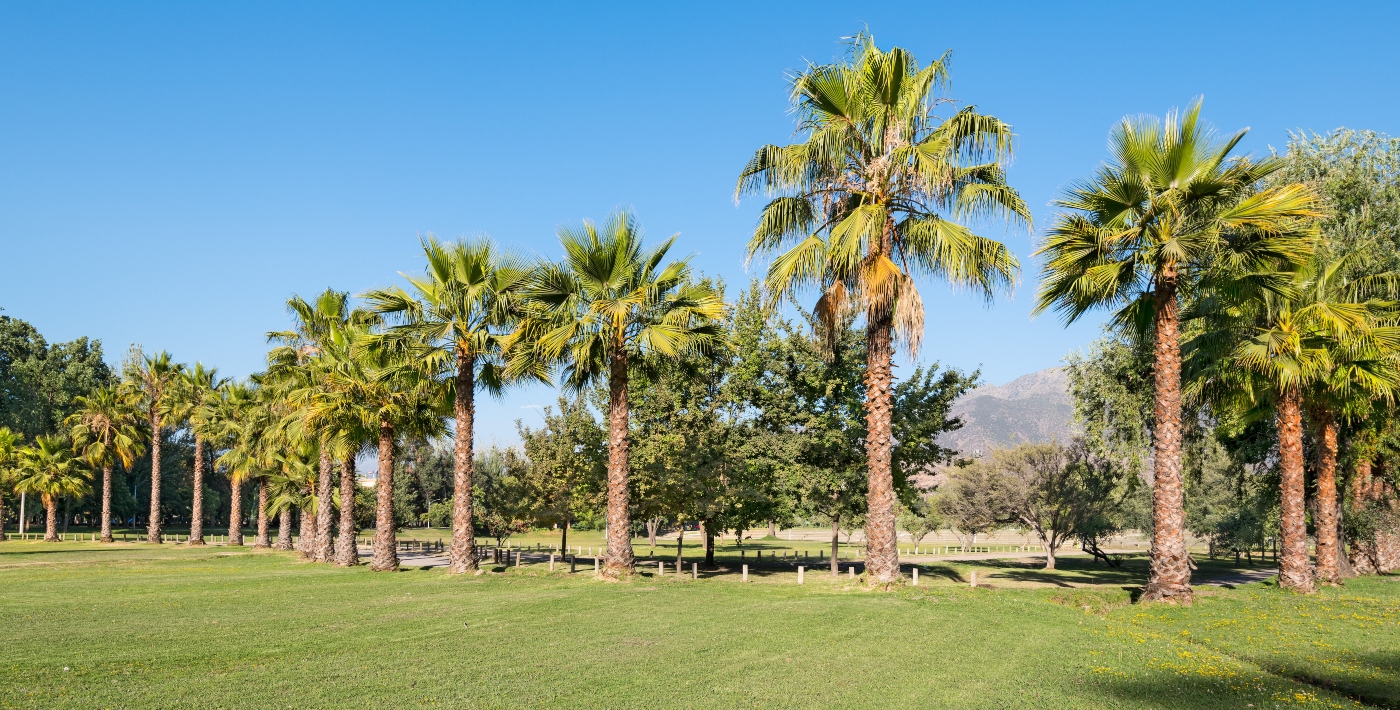 And last, but not least, is Mahuida Park, located at the foot of the Andes, it extends over 170 hectares on the outskirts of the city. Its natural environment is suitable for practicing many different outdoor activities, it has soccer and rugby fields, volleyball courts, picnic areas, rodelbahn, an adventure farm and a riding club. It also contains Vertigo Park, a 5-hectare entertainment center in the middle of a forest, where you can enjoy 1,400 meters (0.8 miles) of canopy, play paintball, Swing and a hike along a. extensive trekking trail.