BIRDS YOU ONLY FIND AT THE SOUTH OF THE WORLD

A REFUGE FOR OUR ENDEMIC BIRDS

Our country’s privileged nature provides shelter to over 500 different bird species flying our skies or running through lands and wetlands, reservoirs, lakes, lagoons and river mouths.  Let us not wait any longer and let us get to know some of them.

Grab your binoculars or camera, comfortable walking shoes, and soft colored clothes and come and tour Chile’s landscapes.  As a birdwatching fan, you know that you must arm yourself with patience and sharpen your senses to achieve the task of birdwatching.

Thirty-three bird species in Chile are in danger of extinction, so the careful and conservationist approach of birdwatching sites must be rigorously observed.

The desert is full of life and there are many bird species that live in this area, not only on the coastline, but also in valleys, mountains and lagoons at high altitude.  The proximity to the northern border ecosystems, as well as the geographical position within the migration route of species from the northern hemisphere, make of Arica and the Altiplano a must for all birdwatching fans.  Here you will see the beautiful and striking Chilean woodstar or Arica hummingbird (Eulidia yarrellii). 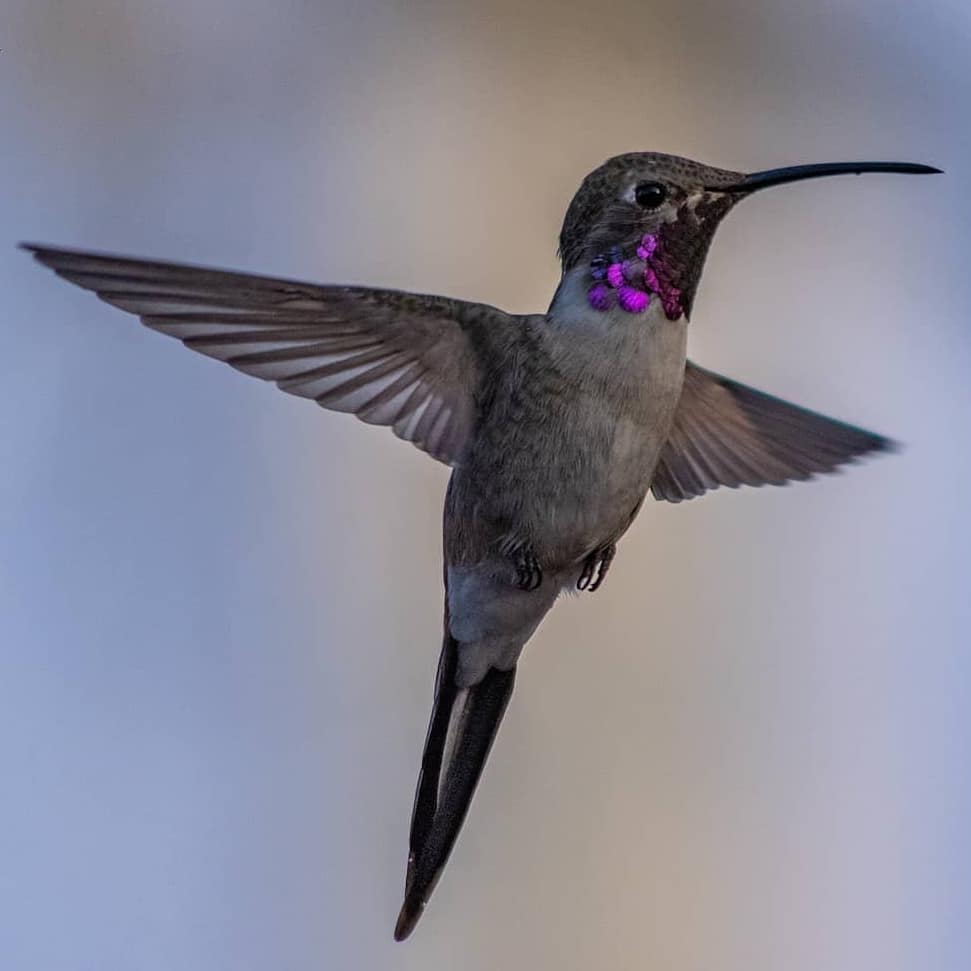 Also, in the north, the wetland at the mouth of the Lluta River is a destination you cannot miss to appreciate the birds of Chile, a protected area of more than 30 hectares on the seashore, but that naturally extends far beyond.

This impressive ecosystem is located only 10 kilometers from the city of Arica and has been declared a “nature sanctuary”, in addition to being part of the Western Hemisphere Shorebird Reserve Network (WHSRN).

The area normally hosts thousands of birds, among which over 180 different species have been registered, including both resident and migratory species, which represent almost one third of the birds in Chile.

The Peruvian thick-knee (Burhinus superciliaris), and the white-backed stilt (Himantopus melanurus) are some of the endemic South American species you will see in the area.

At about 200 kilometers south of Santiago towards the coast is the Cáhuil wetland, in the mouth of the Nilahue River, also famous for its saline waters.  A beautiful and peaceful environment well equipped with lookouts and trails that is home to approximately 60 Chilean bird species, both migratory and resident, including the endangered Coscoroba swan (Coscoroba coscoroba) and the black-necked swan (Cygnus melancoryphus).

Another wetland even closer to Santiago, towards the north, is Batuco, where you will find about 70 resident and migratory bird species where shorebirds can also be seen, making this place a reservoir for almost 20% of Chile’s birds.

What can you expect?  In addition to a protected ecosystem on about 300 hectares, a relaxing and breathtaking landscape, you will also find a large number of resident birds, migratory birds, and occasional visitors.  Ideal for birdwatching.

The San Carlos de Apoquindo natural park, an area that ranges from Santiago to the mountains, also awaits you with different trekking options with trails where we can watch a great variety of native birds of the central mountains and Andean range of Chile.

And if we are talking about endemic species, here you will also see the Chilean partridge or Chilean tinamou (Nothoprocta perdicaria), although you will have to be patient because their brown plumage with black and white spots allows them to easily blend in with their surroundings.  They also have a great ability to squat and remain still, which makes them very difficult to find and watch. 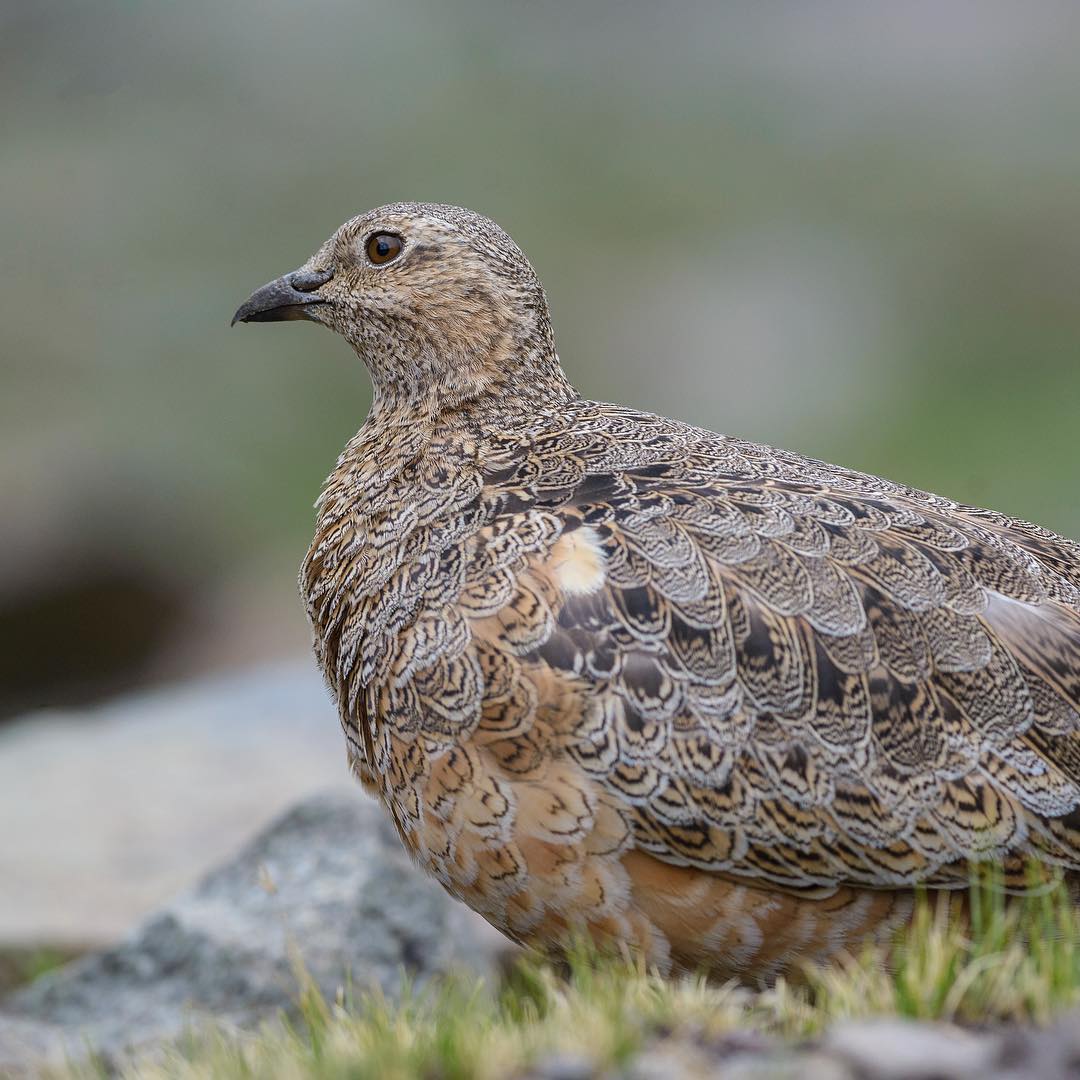 And here we also highlight, of course, the imposing condor (Vultur gryphus), Chile’s national bird, which although not endemic to the country, it is endemic to a vast area of the Andes.  It can be seen in the central zone of Chile, at the San Carlos de Apoquindo Park.

The condor deserves a special mention for being one of the largest flying birds of the planet, reaching up to 142 centimeters in height and more than 3 meters in wingspan.  The spectacle of seeing a condor glide over the peaks of the Andes is impressive and breathtaking. 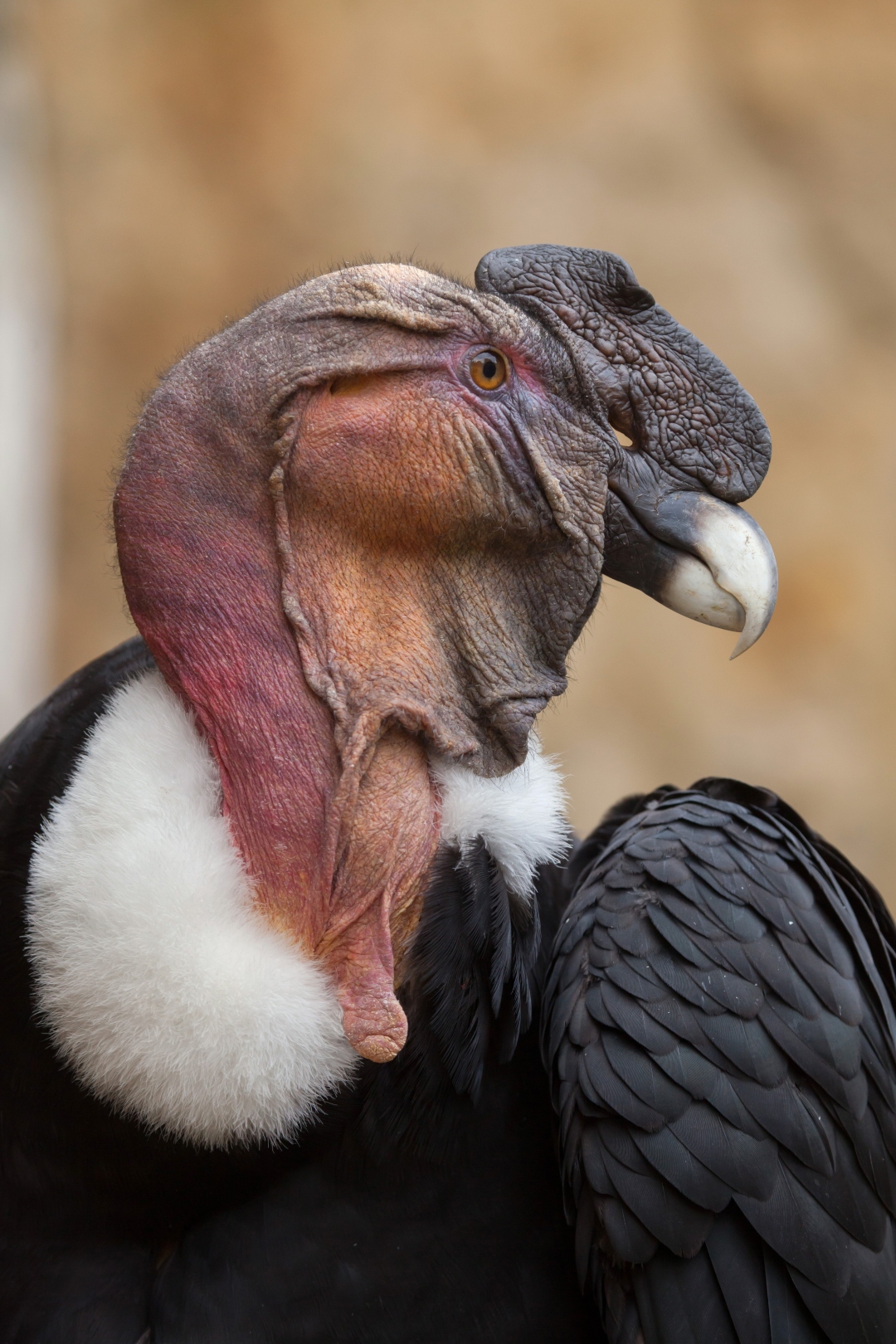 Further south, the chucao tapaculo is a friendly, upright-tailed, orange throat bird, endemic to the temperate forests of south-central Chile, and areas bordering Argentina.  You will easily identify it because it moves around by jumping and occasional short flights. 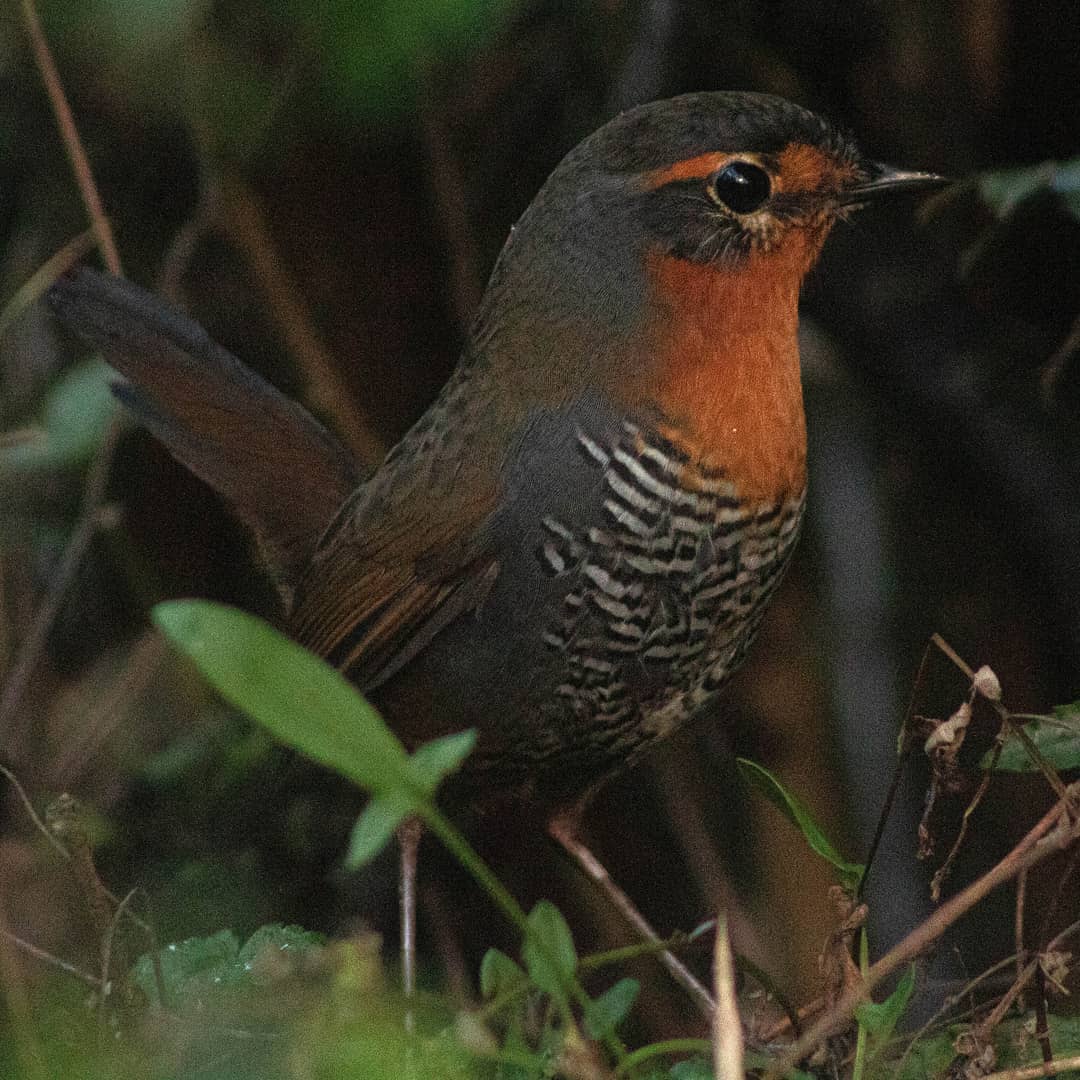 You probably have already read it.  And if you have not, get a copy and read Robinson Crusoe, Daniel Defoe’s fantastic novel that takes you on a first visit to this archipelago that includes the islands of Santa Clara, Alejandro Selkirk, and Robinson Crusoe.  It is a “lost paradise” of species, which in 1977 was declared a World Biosphere Reserve by UNESCO.

Here, in the middle of an exuberant nature and if you have the patience of the novel’s castaway, you will be able to see the Juan Fernandez tit-tyrant (Anairetes fernandezianus), one of Robinson Crusoe Island’s endemic birds, small and with a wispy crest on its head resembling a horn which gave it its name in Spanish (Cachudito). 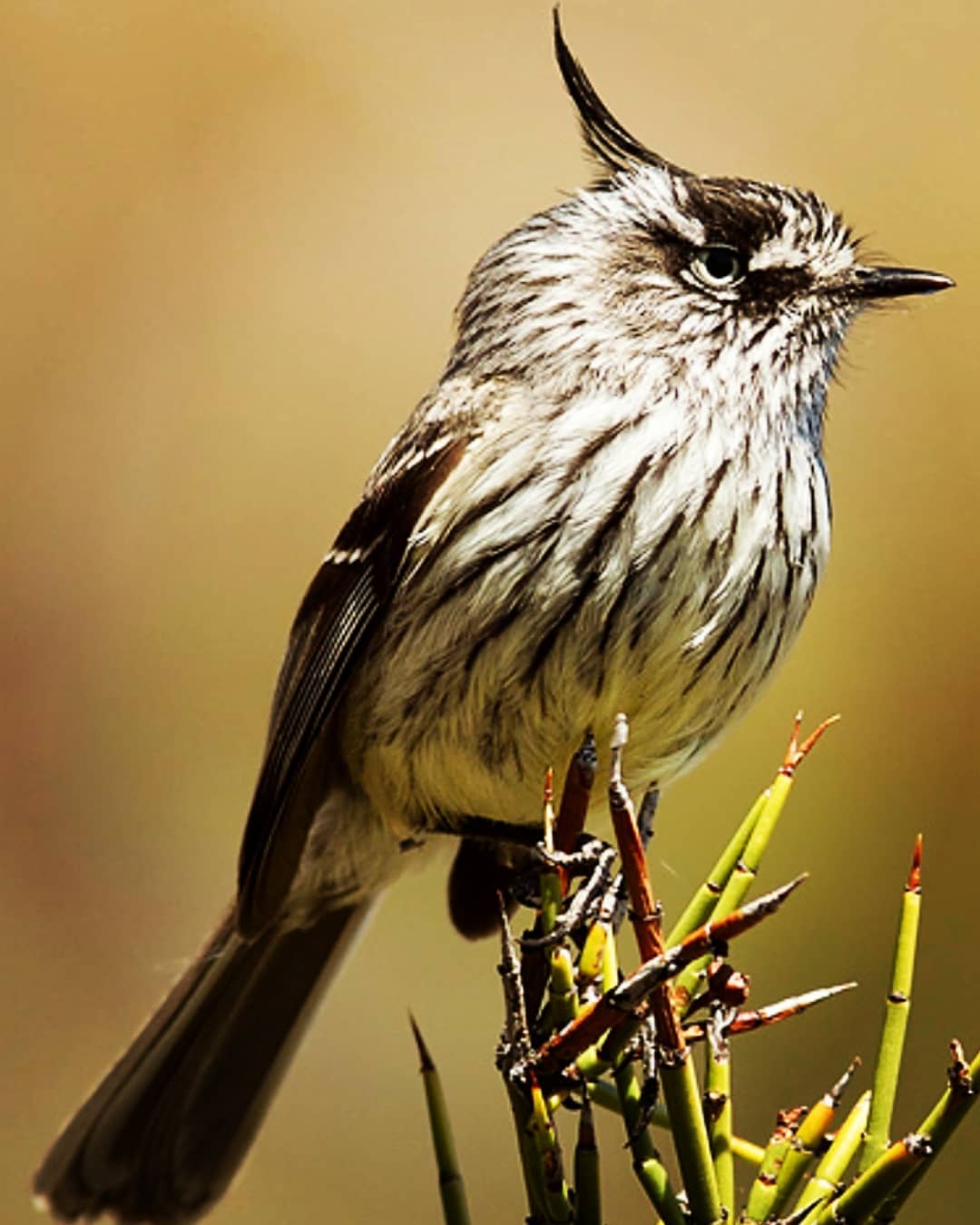 And of course, also from the archipelago takes its name the Juan Fernández firecrown (Sephanoides fernandensis).  Males are dark red with golden feathers on their head, while females are white with small green and black areas, with an iridescent blue crown, and blue and green on top.

They look like two different hummingbirds, but they are just a spectacular example of sexual dimorphism.  Considering that it is also in danger of extinction, you must take your time to look for them and watch them while you are in the archipelago. 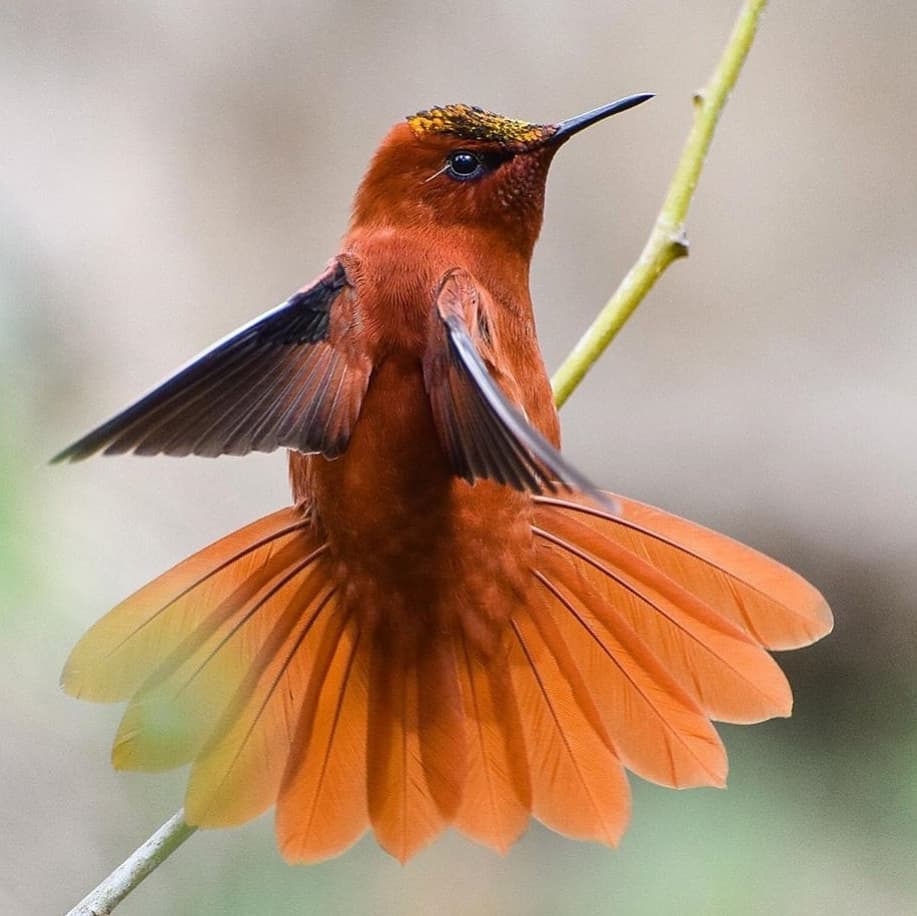 A third bird endemic to the Juan Fernández Archipelago is the Masafuera Rayadito, whose natural habitat covers only eleven square kilometers of shrublands and multiple tree ferns along with the Drimys confertifolia, a tree also endemic to the archipelago.

Do not delay looking for it; it is critically endangered. 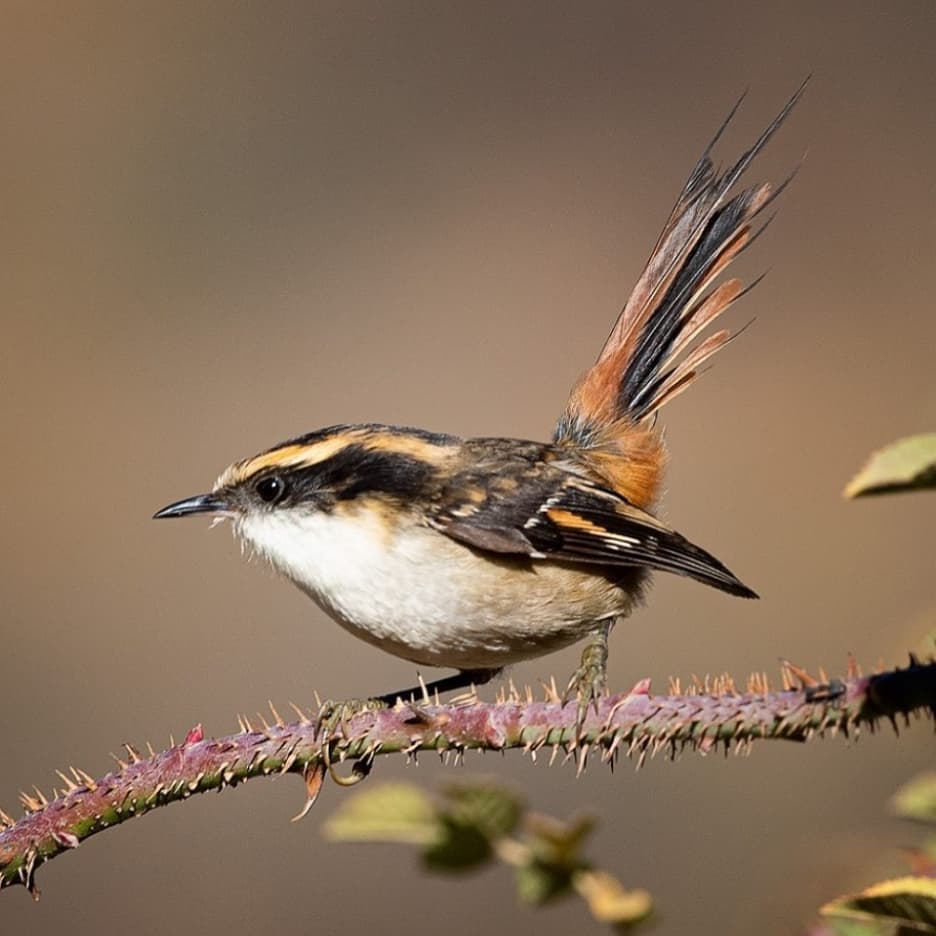 THE “SORCERER” OF CHILOÉ

Legend has it that the Fire-eyed Diucon (Xolmis pyrope fortis) is the daytime assistant of “sorcerers” in the island of Chiloé in southern Chile.  The sorcerer selects a Diucon and “sends” the bird to spy on people or announce an opinion or mandate.  Hence, its colloquial name in Spanish “mandao” (envoy).

For the locals it is also a bad omen bird: its mere presence is a sign that someone could get sick, or if it flies downward from the top of a branch, it is calling a storm.  One must respect and treat the diucon well, but, above all, know and observe it in order to become acquainted with its curious behavior; a bird that does not easily escape from human beings and seems to observe us closely with its imperturbable red eyes. 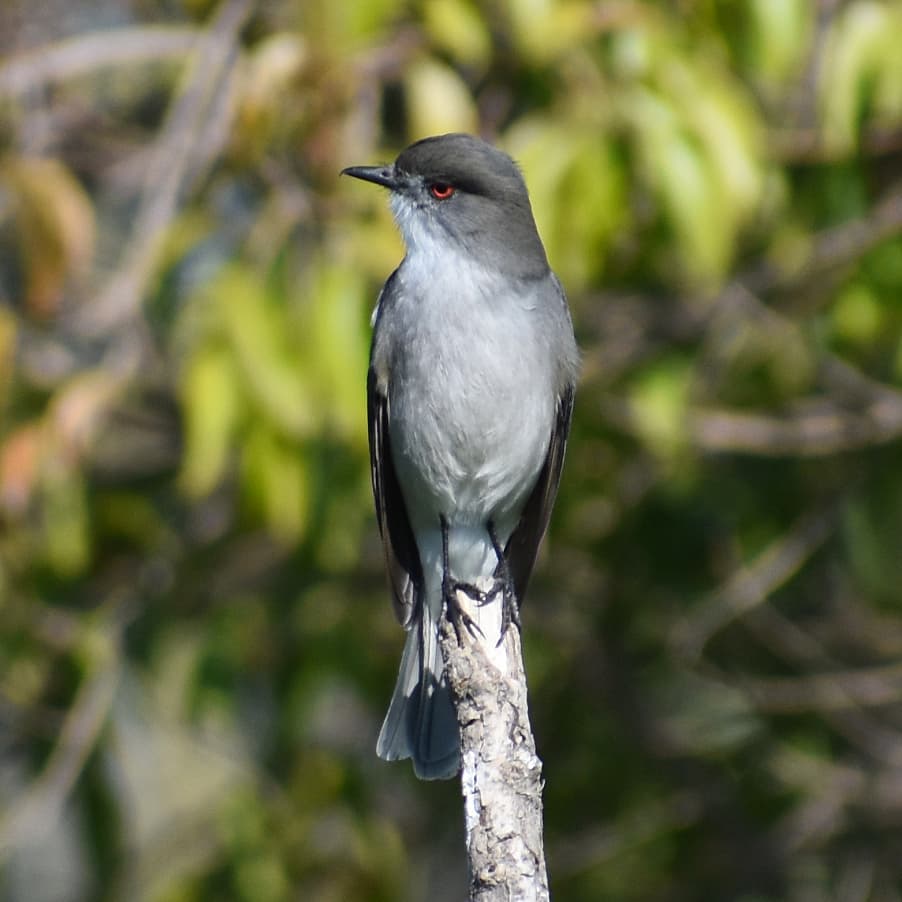 IN TIERRA DEL FUEGO, THE WETLAND

It is one of the rarest birds in the world, found only in the southern tip of South America, in Magallanes, Tierra del Fuego, Falkland Islands, and occasionally Lennox Island.  You will recognize it by its soft-looking gray and white plumage and its bright pink legs and red eyes. 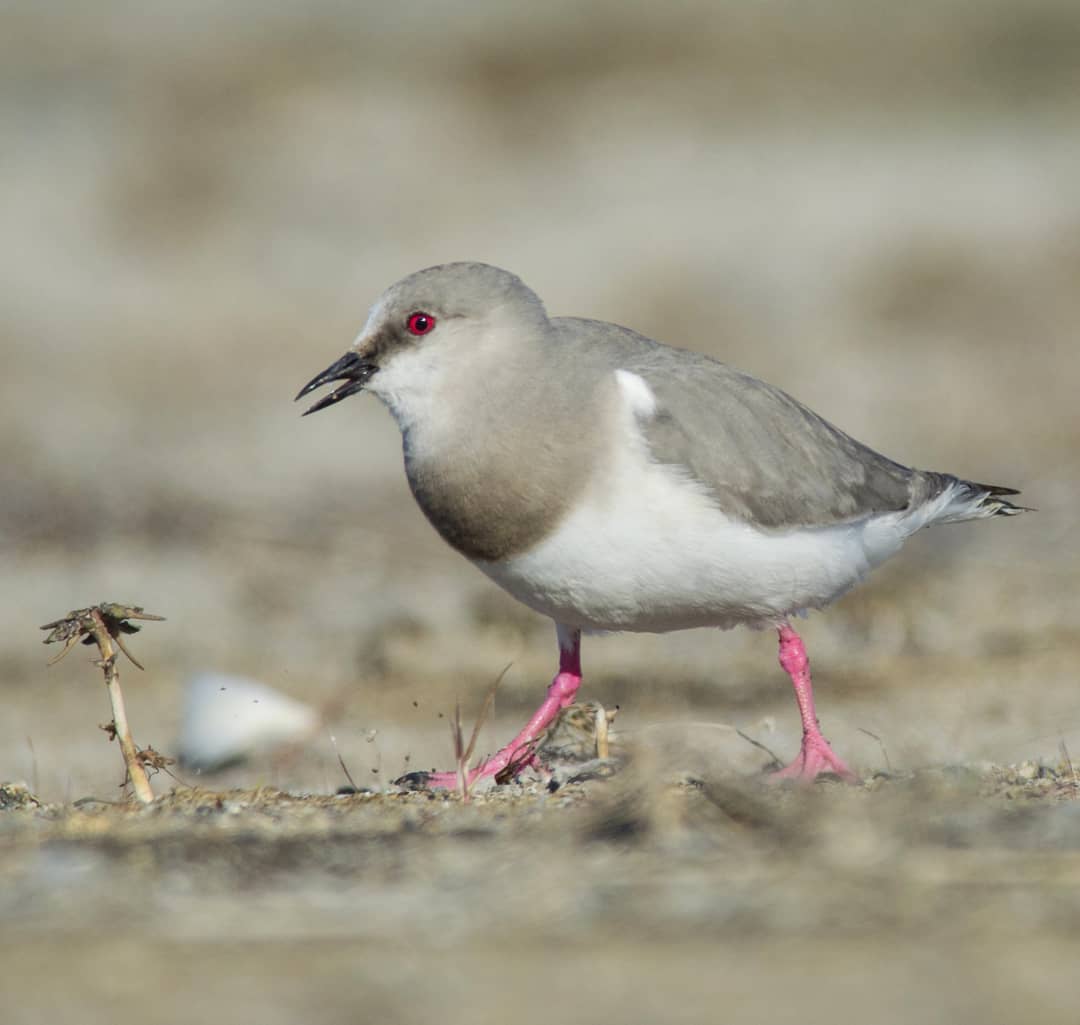 These and other endemic species are waiting for you to watch them in their natural surroundings and record them in your photos or in your memory as an extraordinary display of nature at the end of the world.

Contest!  Participate to win a pair of Swarovski Optik binoculars clicking the following link http://chiledayandnight.co.uk/ where you only must answer one question and include your contact information.

And here we also highlight, of course, the imposing condor (Vultur gryphus), Chile’s national bird, which although not endemic to the country, it is endemic to a vast area of the Andes.  It can be seen in the central zone of Chile, at the San Carlos de Apoquindo Park.

The condor deserves a special mention for being one of the largest flying birds of the planet, reaching up to 142 centimeters in height and more than 3 meters in wingspan.  The spectacle of seeing a condor glide over the peaks of the Andes is impressive and breathtaking.