Bioluminescence in Chile: When the ocean glows

Can you imagine the ocean glowing and lighting up the night’s darkness? It is not science fiction, it’s a true natural phenomenon that occurs on the coasts of northern and southern Chile! Discover Bioluminescence in Chile and allow yourself to be amazed by the magic of the oceans of the southernmost coasts of the world.

Our Pacific Ocean, rich in biodiversity, has been the protagonist of one the most spectacular phenomena that nature can give us, bays that glow in the darkness of the night as if someone had turned-on the pool lights inside the ocean, or if someone where trying a new magic Instagram filter.

Although Bioluminescence in Chile is not yet very well known by the general public, scientists on the other hand are very familiar with them. Nature never fails to surprise us, and living organism with their own set of headlights are no exception. Bioluminescence occurs widely among microorganisms such as some fungi, bioluminescent bacteria, fish, jellyfish, worms and terrestrial invertebrates such as fireflies, who transform their habitats into a true visual party.

We’re all familiar with the beautiful fireflies that fly around with their shining body or those fish that carries a type of headlamp like the one in the Disney movie “Finding Nemo,” but little do we know about this phenomenon that occurs on the shores of several parts of the world, and that lately has been surprising the visitors of Bahía Inglesa, in the north of Chile or also on the coasts of Aysén, in the extreme south. 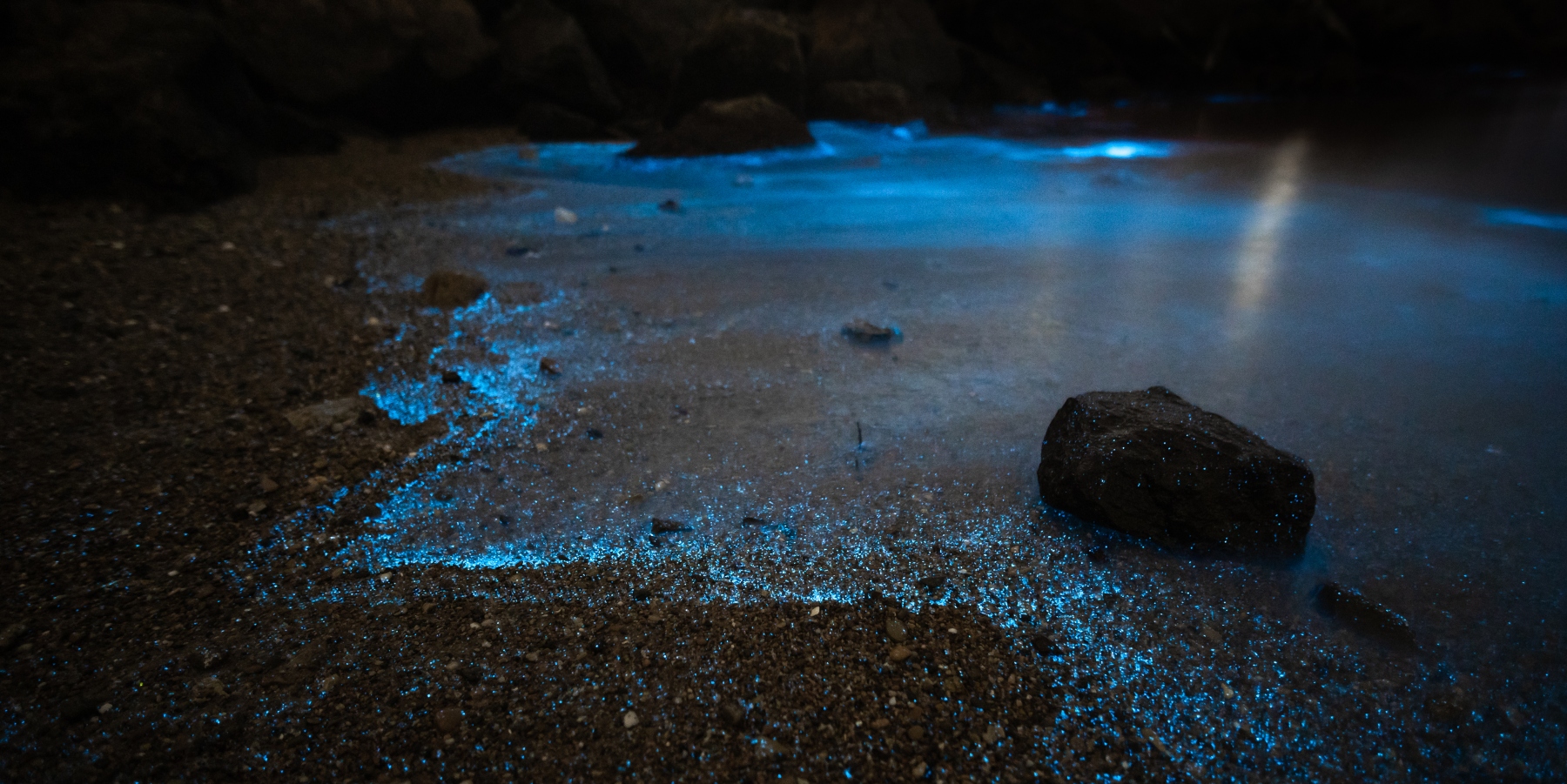 Just as the name indicates, the word bioluminescence comes from the Latin “Bios” which means Life and “Lumen” meaning Light. This natural phenomenon exists across the entire biological spectrum of living organisms, but they are particularly present in marine species that live in the deep sea.

These living lights are the result of a biochemical reaction that, in most cases, comes from the interaction of a molecule called “luciferin”, that reacts with oxygen and ATP (adenosine triphosphate) capable of producing light, that of course is most noticeable at night and shocks anyone who sees it.

Generally, certain species cause this reaction to defend themselves or to attract their prey. Some deep-sea squid that live where there is no natural light shoot out a “bioluminescent” liquid to confuse their predators, instead of black ink which wouldn’t be visible, like other squid who live closer to the surface. What is interesting is that deep-sea squids use the same defensive mechanism as some surface squids, but make their ink visible in areas where there is no light.

On the other hand, fireflies produce their luminosity in order to become more visible and attract mates to reproduce. Whatever the reason is for this natural phenomenon to occur, the fact is that it is an impressive spectacle for human eyes.

BIOLUMINESCENCE ALONG THE COASTS OF CHILE

Lately, this amazing phenomenon has been seen along the coasts of northern Chile, on the beaches of Bahía Inglesa, Playa Blanca and Las Machas Beach, in Caldera. These calm beaches with which sands and turquoise water have displayed this incredible nocturnal spectacle.

During the early morning hours in February of 2018, one of the first occurrences of this phenomena was appreciated and photographed by fishermen and locals. The news circulated extensively and many visitors were lucky enough to see it because this unusual show lasted for about three days, and continued happening every so often. 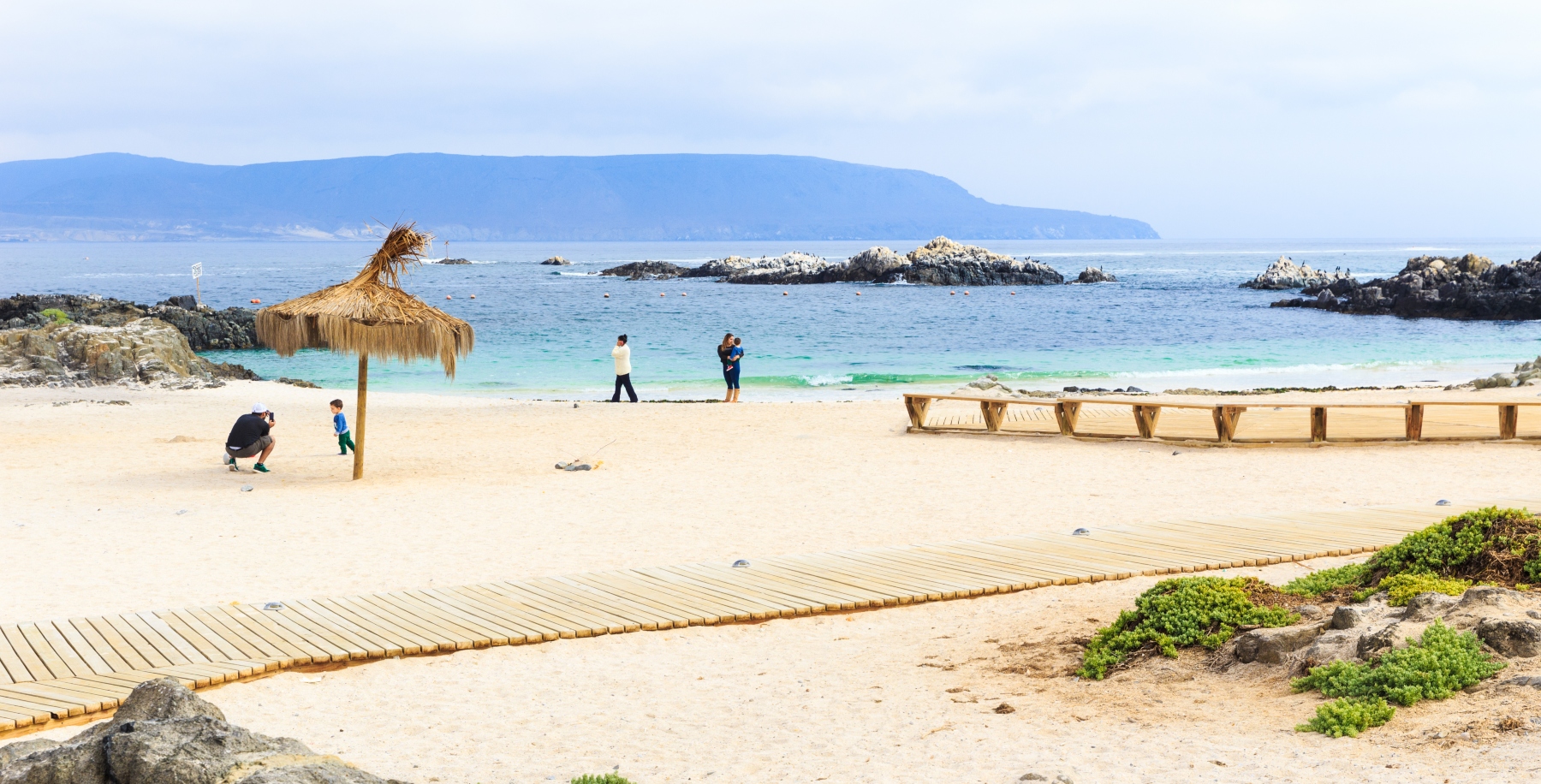 Experts explained that the phenomenon was not something to be afraid of, and even though the population was profoundly amazed by this hallucinating spectacle, they were reassured that there was no imminent danger associated with the bioluminescence, which many imagined was caused by some accidental spill of radioactive chemicals.

But no, it is a completely natural incident, which has even inspired movies like “Avatar”. You may be reminded of the resemblance between the fluorescent bioluminescence that lights up the ocean and the brightness of the fantastic beings in Spielberg’s film.

Many areas off the coast of Bahía Inglesa light up completely, radiating an intense glow that arises from the bottom of the ocean. Tiny algae glow and shine like a luminous blanket over the waves and it’s like seeing fluorescent spots everywhere.

Lucky witnesses of this phenomenon say that the movement of the waves makes these lights shine brighter, and in case you step on sand or rocks where these tiny creatures lay, your foot starts glowing!

Bioluminescence in Chile and in the rest of the world is caused by a type of Noctiluca (Noctiluca scintillans), a bioluminescent organism that activates with the movement of water and causes a bluish / greenish fluorescent hue to illuminate the sea.

According to experts, it is not possible to predict when it will happen again, but if it has already happened once, it is like to continue happening. Generally, it is a seasonal phenomenon that will either return to the same place or it will move along the coast nearby. This is because these bioluminescent organisms move and float freely throughout a body of water, practically anywhere from the surface to the seafloor, or from near the coast to the open ocean.

Although the presence of bioluminescence is recurrent in some places with warmer waters, which is the opposite to the case of Chilean waters, in our country this phenomenon can be explained by the variation of currents that transport these organisms towards our coasts where they feed off of eggs, larvae, crustaceans and other planktonic zoo organisms, like phytoplankton.

THE SURPRISING CASE OF PLAYA BONITA

The south of Chile is no stranger to this marvelous spectacle that makes the sea glow. Noctiluca have also been spotted in some places of the Aysen region.

One of the most notorious cases has been in Playa Bonita, also known as the “Caribbean corner of the Chilean Patagonia”, 15 minutes from Puerto Gala. Another place where they have been reported is in Puerto Aguirre, in el archipelago of Huichas Islands.

Puerto Gala, also known as Toto Island, is a bunch of islands located in Moraleda canal. Amongst the islands, in a magical environment full of surprises, you are likely to become enchanted if you have an adventurous spirit.

In addition to seeing the fluorescent glow of the sea, the locals can show you around and design a special route for you that will exceed your expectations, kayaking in the waters of the canal, surrounding islands and even visiting sea lion’s islands, which are all impressive options.

Playa Bonita is the perfect place to go for the day, to enjoy the calm waters of an area that is protected from winds and waves. It’s no coincidence that the inhabitants of this territory named it “Pretty Beach”.

It is a small paradise with white sands, surrounded by forests, with waterfalls that are over 30 meters tall, and that is protected from the big waves. It is the ideal place to have a picnic day or even to camp overnight. That way, when it’s dark, you can enjoy the phenomenon of Bioluminescence.

For those who are most adventurous, we recommended going to an incredible viewpoint near the beach. The tricky part is that there’s only one path to get there, and not everyone knows where it is.

Once there, you will see an incredible view of the entire canal and its islands. After you’ve enjoyed an amazing sunset, dusk will surprise you with a sky illuminated by thousands of stars and, perhaps the sea will also be illuminated thanks to the fascinating phenomenon of Bioluminescence, granting you one of the most unreal and spectacular nights of your lives.